Tyrod Taylor was huge for his team today. (Getty)

Marcus Mariota was good, but couldn’t get a score when it mattered most. (Getty)

After Week One his nickname was T-Mobile. After Week Five, it might be Superman.

Tyrod Taylor, without a handful of starters on offense, engineered two second half touchdown drives to stun the Titans, 14-13. One came almost exclusively from his legs, and the other from a tremendous performance from Chris Hogan.

The Titans controlled the game for much of the afternoon, but struggled to put points on the board. That bit them in the second half, when injuries to their offensive line made the Buffalo pass rush overwhelming.

Tennessee had one last chance to drive for the lead, but Mariota threw a poor ball that was intercepted by Stephon Gilmore with 1:24 remaining.

Dang, #Titans. Gotta learn how to close teams out.

The Titans are now 0-2 halfway through their four game home stand and are 1-3 on the season. The Titans will next welome the Miami Dolphins, who are on break and in the midst of a coaching change. The Bills (2-3) will head home to take on the undefeated Bengals.

A "Let's Go Buffalo!" chant is being heard loud and clear in this crowd. Pockets of #Bills fans throughout Nissan Stadium.

Nobody circles the wagons like…Tyrod Taylor?

Taylor punctuated an 80-yard drive with a short TD pass to Chris Hogan to take the lead late for Buffalo. For a Bills team that was throughly dominated on both sides of the ball, the offense and defense stepped up when it matters most. Taylor drove for the winning score with just over four minutes left, and the defense shut the door on Mariota when it counted.

We have life in Nashville.

After a crucial fumble on a punt return gave the Titans good field position, they finally cracked the goal line. Antonio Andrews scored on his second attempt from the one yard line, pushing the Titans lead to 10.

After three quarters without McCoy and Sammy Watkins, Tyrod Taylor got the ball to his top playmaker: himself.

On the Bills next drive Taylor was electric, rushing for a total of 62 yards. A 22-yard QB draw is what finally put the Bills on the board, cutting into the lead at the start of the final quarter.

#Titans win replay review. Ball ruled to come out before Moore was down. TN ball at #Bills 39.

It was a fumble. #Titans ball. Stevie Johnson recovery

After both teams stumbled on their opening drives, the Bills were looking for a spark from newly signed punt returner Denarious Moore. Moore got a nice kick, and put together a solid return for Buffalo. The ball popped out, but an official directly in front of the play emphatically ruled that Moore was down before the ball came loose. Tennessee challenged the play, and the call was reversed. Huge play for the Titans.

Extremely ugly first half for #Bills. Taylor has been awful, but he also is missing some key help. #Bills' D is doing what it should do.

It’s been a bad half for the Buffalo Bills.

This season, that statement has meant penalties. But the Bills haven’t committed many penalties in the first half. In fact, they haven’t done much of anything. The Bills have 51 total yards.

Titans DC Dick Lebeau, long known for confusing inexperienced quarterbacks, has drawn up a nice game plan for Tyrod Taylor. The Titans have limited his mobility, and the Titans pass rushers have been living in the Bills backfield. The Bills rush game has been a non-factor without Williams or McCoy, forcing Taylor into even more dangerous situations. Titans DL Jurrell Casey had perhaps the best half of his career, with two third down sacks that ended drives.

On offense, the Titans have been all sparks and no fire. They’ve held the ball for almost 21 minutes, but haven’t been able to threaten the end zone or get into any type of passing rhythm. Rex Ryan is 9-2 against rookie quarterbacks, and Mariota hasn’t exactly been electric (13/18 125 yards).

After all their ineptitude, the Bills are down three and will start the second half with the ball.

That's the end of the 1st quarter in Nashville. No score yet. #BUFvsTEN

In a matchup made famous by kick returns, another chapter was almost written early. But after an opening kickoff fumble was negated by an offsides penalty, both teams settled in and played field position early. Buffalo managed just seven total yards. There were four total punts.

The Titans ended the quarter driving, but couldn’t finish the job. On a 4th and 2 at the 3 yard line, the Titans ended their 13-play drive with a field goal. So far they’ve controlled every aspect of this game.

It’s nice to get a break every now and then.

The Bills have not had an easy start to their season. Their early season opponents have included Tom Brady, Eli Manning, and Andrew Luck. This week, they will have respite from the elite, facing a well-rested Marcus Mariota. During his tenure with the Jets Rex Ryan was 9-2 against rookie quarterbacks, so it’ll be interesting to see how Mariota fares given the extra week of preparation.

For Tennessee, they’ve literally had a break. But for the Titans, the bye couldn’t have come at a worse time. When the Titans were last on the field, they were blowing a 13-point fourth quarter lead to Andrew Luck and the Colts. Since then the Colts have won two more games, and now the Titans are once again looking up at division-leading Indianapolis. If the Titans have any edge, it’ll be in Nissan Stadium. The Titans are playing their next three games at home, and won’t play on the road again until November. 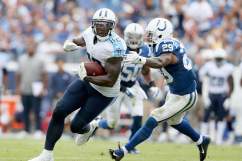 How to Watch Bills vs. Titans Live Stream Online