What was Luis Enrique’s response following a 4-0 win in El Clasico?

“We could have played better.”

The Barcelona manager is keeping his foot on the gas, as Barcelona can win Group E and advance to the UEFA Champions League Knockout phase with a draw against Roma. But that doesn’t satisfy Enrique, who feels like his team can climb even higher.

“We see this match as an opportunity to finish first in the group,” he said earlier this week. “I believe we have played better [than on Saturday] although 4-0 against Real Madrid attracts more attention. I can’t compare it to the 6-2 victory [at the Santiago Bernabéu in May 2009]. I expect a difficult match, because they need to get a result, so the game will be very open.”

The only left to do is to wonder about Messi. The Argentinean made his return to the pitch in the second half against Madrid, but could make his first start in two months against Roma. 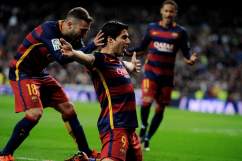 How to Watch Barcelona vs. Roma Live Stream Online

Read More
Barcelona, Soccer, TV, UEFA Champions League
Messi is back on the Barcelona roster, and may make his first start in over two months against Roma.