Landry Jones starts at QB for the Steelers today as they host the Cleveland Browns.

TV Channel: The game will be broadcast on CBS for most of the nation, with Ian Eagle and Dan Fouts on the call. Click here to check and see if you’re within the game’s coverage area.

Game Preview: Ben Roethlisberger gave it his best shot in practice, but was unable to recover from a foot injury in time for Sunday’s start. The Steelers QB missed four games earlier this season with a sprained MCL, forcing Pittsburgh to use a combination of Michael Vick and Landry Jones. Jones will start for the Steelers this week, and will face off against Browns backup QB Johnny Manziel.

Josh McCown has been battling rib injuries for Cleveland, and although McCown was able to practice for multiple days this week, coach Mike Pettine has leaned towards naming Manziel the starter. The Browns have lost four straight, and haven’t won in Pittsburgh since 2003.

Look for a heavy dose of DeAngelo Williams, filling in for Le’Veon Bell as the Steelers starting back. Williams carried 27 times for 170 yards and two touchdowns last week against the Raiders, and was the Steelers key to victory. After the game the highlights focused on Antonio Brown’s big day, but it was Williams that kept the chains moving for Pittsburgh. 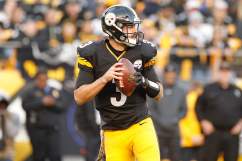