Ryan Fitzpatrick will lead the Jets into Houston, to face the team he started for last season. (Getty)

The Jets look to rebound from last week’s loss to the Bills Sunday against the Texans. Houston is on a short week, and will start T.J. Yates at quarterback.

TV Channel: The game will be broadcast on CBS, with Kevin Harlan and Rich Gannon on the call. Click here to check and see if you’re within the game’s coverage area.

The Texans have had quarterback struggles this season, but it’s getting ridiculous. T.J. Yates was signed by the Texans less than a month ago, but only to back up Brian Hoyer. After Hoyer was crunched in Monday’s game against the Bengals, Yates stepped in and led the Texans to a 10-6 victory.

Instability at the game’s most important position has bogged the Texans all season. Hoyer was benched as the team’s starter after one game, only to replace Ryan Mallett after an injury three weeks later against Atlanta. That started the Ryan Mallett Meltdown, which culminated with him missing the team’s plane to Miami and him getting released from the team.

Hoyer has made daily progress in his recovery from a concussion, and is on track to return for the Texans next week. 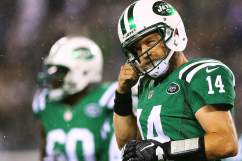