The slip-ups that started their Champions League season has come back to haunt them, and now Arsenal needs a big offensive result in Greece to secure a 16th straight Round of 16. They head to Greece for the final game of Group F, where they will be short-handed for their biggest match to date this season.

Alexis Sanchez and Santi Cazorla are both out for tonight, which could pose a problem for a Gunners side that needs to score. After losing to Olympiakos 3-2 in London, Arsenal trails the Greek powers by three points in the standings. That means Arsenal will have to better that scoreline tonight, and advance on overall goal distance.

Arsenal have never won in Greece, but have never played a match with as much at stake as this one. They’ve drawn once and lost four times, but those matches have occurred when Arsenal has already safely advanced to the Knockout phase.

Olympiakos are unbeaten in domestic play, and their only loss this season has been to Bayern Munich. 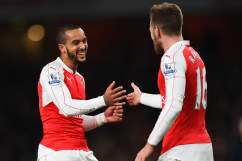 How to Watch Arsenal vs. Olympiakos Live Stream Online