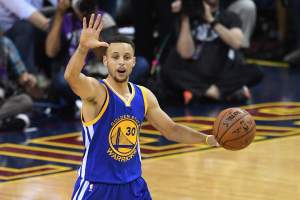 Steph Curry and the Warriors will look to finish out the series. (Getty)

After failing to close out the series in Game 5, the Warriors will look to win the NBA Finals on the road. According to OddsShark, the Cavaliers are a two-point favorite at home.

Golden State were without a suspended Draymond Green who will play in Game 6. However, they have lost center Andrew Bogut for the rest of the series. The over-under is set at 207 points.

Cleveland received a huge boost from LeBron James and Kyrie Irving in Game 5 as both players had 40-point games. James also had 16 rebounds and 7 assists.

Despite the loss of Bogut, the Warriors will benefit from Green being back on the floor. Green should open things up for Steph Curry and Klay Thompson. Golden State has enough depth to survive Bogut’s absence.

Heavy likes the Warriors to come away with the win in Cleveland to win back-to-back NBA titles.

Heavy’s Pick: Warriors 99 Cavaliers 93. Warriors +2. Under on the point total.

Read More
Basketball, NBA, Odds, Sports Betting
The Golden State Warriors take on the Cleveland Cavaliers in NBA Finals Game 6. Find out the latest odds, point spread and our prediction for the game.