After Poland and Portugal played to a 1-1 draw through 120 minutes, Portugal clinched the first semifinal spot at EURO 2016 by converting all five of their spot kicks. Ricardo Quaresma’s penalty was the clincher, with Portugal outscoring Poland 5-3 during that portion of the match.

The penalty shootout turned in Portugal’s favor when Rui Patricio saved Jakub Blaszczykowski’s attempt to the low left corner of his goal in the fourth round of kicks. After that Quaresma calmly scored his penalty, advancing Portugal to their second consecutive UEFA European Championships semifinal.

The match got off to an explosive start, with Robert Lewandowski scoring his first goal of the competition in the second minute. Portugal would respond in the 33rd minute, as 18-year old Renato Sanches scored his first goal at the senior international level to tie things up at one goal apiece.

But that would be all of the scoring in the run of play, with the two teams playing the next 87-plus minutes to a stalemate and needing penalties to determine who would advance to the semifinal round. Next up for Portugal will be the winner of the Wales vs. Belgium match, with that scheduled to be played Friday afternoon. 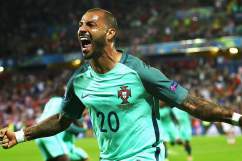 Who Won the Poland vs. Portugal Match in Euro Quarterfinals?