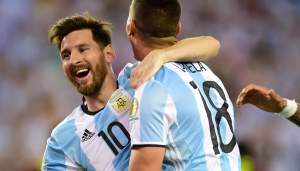 USA have reached their goal of the Copa America semifinals, but the final at MetLife will be a tough task against Lionel Messi and might Argentina. Messi and his mates are massive favorites heading into Houston, as an already outmatched USA squad will be missing a trio of key players.

Here’s a look at all the betting information you need to know, along with a prediction for Tuesday night:

It was a tournament that started with disappointment for USA, but now they could be poised to end in history. They’ve already tied their best-ever finish at Copa America, matching their fourth-place finish in 1995. A win over Argentina, a win without three players who started every game in the tournament, would be nothing less than the greatest achievement in the history of this sport in this country.

Argentina looks like a team on a collision course with Chile in the final- a rematch of last year’s final won by Chile in penalties. It’s been 23 years since Argentina raised a trophy at a major international competition, and they’ve played like the best team in four games leading into Tuesday.

La Albiceleste are 4-0-0 at Copa America, defeating opponents by a 14-2 margin. Messi started the tournament on the bench with a back injury, but has still amassed four goals in three appearance, including a hat-trick in the span of 19 minutes against Panama.

And then there’s the suspensions. Jermaine Jones, Bobby Wood, and Alejandro Bedoya have all started every match for USA at Copa America. Wood has wreaked havoc on defenses up front, and Jones and Bedoya are important players for USA at both ends of the field.

Klinsmann’s choices for Tuesday’s lineup will give an indication of what his strategy will be. If he goes with names like Zusi and Beckerman, expect a defensive effort against Argentina. If the names Nagbe and Pulisic are on the team sheet, expect an attacking side at NRG Stadium Tuesday night.

It will probably be a mix of both, and it probably won’t matter. There’s no shame in going out to Argentina: this is the world’s top-ranked team. It’s robbery that they haven’t won a trophy in 23 years, and USA fans will be just as excited to root for Messi in the final as their own squad.