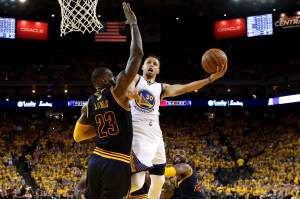 Steph Curry and LeBron James are battling for the championship. (Getty)

The Golden State Warriors head into Cleveland with a 2-0 lead. LeBron James and the Cleveland Cavaliers will host their first game of the 2016 Finals as they look to cut into the deficit. Game 3 gets started at 9 p.m., and ABC will have the live broadcast.

Line: Even (Line is according to OddsShark and subject to change.)

Live Stream: ESPN will be offering a live stream of Game 3 on ESPN3 and the Watch ESPN apps.

Game Preview: It has been total domination for the first two games of the series. The good news for Cavs fans is Cleveland plays host the next two finals games.

Cavs forward Kevin Love is listed questionable for the game after suffering concussion symptoms in Game 2. James has struggled shooting the ball in the series and hopes to get back on track at home.

For the Warriors, it has been the supporting cast that have been the difference makers. Steph Curry and Klay Thompson have yet to have one of their signature shooting games.

The Cavs find themselves in a must-win scenario in order to avoid the series going to 0-3.