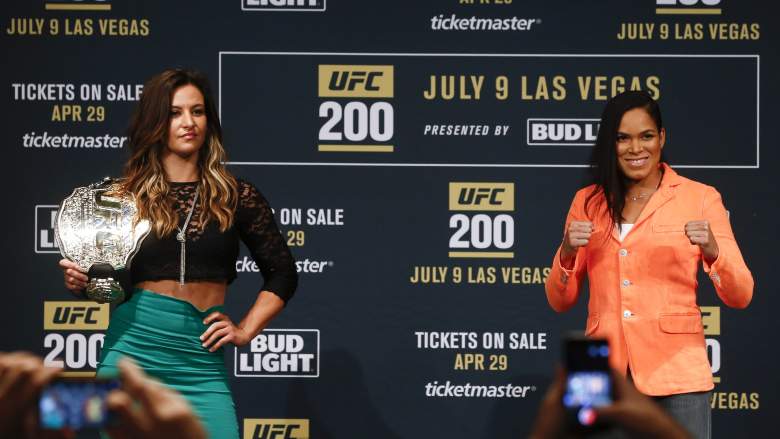 Miesha Tate was to defend her title against Amanda Nunes Saturday night at UFC 200. (Getty)

There’s a new Women’s Bantamweight Champion in the UFC.

Amanda Nunes of Brazil forced Miesha Tate to submit with a chokehold in the first round in the main event at UFC 200 Saturday night in Las Vegas to become the new champ.

Tate got off to a quick start in the first minute, taking down Nunes, but the contender took over shortly after, hitting Tate with strike after strike to the head. Then Nunes applied a rear naked choke and Tate tapped out 3:16 into fight.

Here are some highlights:

OMG!!!!!!! @Amanda_Leoa is the UFC bantamweight champion of the world! #AndNew pic.twitter.com/i0k6asCfcU

I feel amazing. Every fighter has something to change [in order] to evolve. I am this kind of fighter. I always have to work to try to make things happen in my life. Everybody knows that I respect Miesha a lot but I’m the new champion.

The Bantamweight belt has changed hands a lot over the past year. Ronda Rousey was the champion until she was beaten by Holly Holm in November 2015. Holm then lost the title to Tate four months ago in March. Now, Nunes is No. 1.

Read More
MMA, UFC
Who won the Miesha Tate vs. Amanda Nunes fight at UFC 200 on Saturday night? Nunes defeated Tate by submission in the first round.