Eva Marie gets out of a match on August 2nd’s episode of SmackDown. (WWE.com)

I am disappointed that this suspension has occurred, yet understand and respect that WWE upholds their Wellness Policy to the letter and won’t compromise on its integrity. I violated policy by not turning in portions of required paperwork in the time frame WWE Medical deemed timely. I look forward to my return! Thank you for your support.

WWE superstar Eva Marie has been suspended for 30 days after violating the company’s wellness policy.

The WWE broke the news on August 18th. It did not offer any further details, but the company’s employers are generally suspended if they use any recreational or performance enhancing drug. They are also not permitted to drink alcohol within 12 hours of a show.

This has been quite an eventful 24 hours in the WWE universe, as Eva Marie is the third superstar to receive a wellness policy suspension during that period of time. Yesterday, Alberto Del Rio and Paige were both suspended for the same reason and for the same amount of time.

Eva Marie will now be missing two pay-per-view events, SummerSlam and Backlash. These pay-per-view events are generally a large source of income for WWE stars. Unlike Del Rio and Paige, Eva Marie was scheduled to appear at SummerSlam on Sunday, wrestling with Natalya and Alexa Bliss against Carmella, Becky Lynch and Naomi. It remains to be seen if someone will fill in for Marie or if that match will be cancelled altogether.

On Twitter, Eva Marie’s husband claimed that his wife has been treated unjustly by the WWE, saying he’ll elaborate soon.

When the public finds out why my wife was unjustly suspended they will be absolutely outraged! Official statement and facts coming soon.

Although Alberto Del Rio’s time with the WWE seemed to be nearing its end, and Paige’s future in the company was unclear, Eva Marie is a rising star in the company, making a large impact on SmackDown over the past few weeks. She has functioned as a heel, trolling the entire audience with an ongoing bit during which she comes up with increasingly unrealistic excuses for not participating in matches.

With the WWE SmackDown Women’s Championship belt also expected to be announced soon, there have also been rumors that Eva Marie would become the first person to hold this title. With this 30-day suspension, this now seems extremely unlikely.

Eva Marie is now the sixth WWE superstar to be suspended in 2016. Before her, Konnor, Adam Rose, Roman Reigns, Alberto del Rio, and Paige were all hit with suspensions for violating the wellness policy. 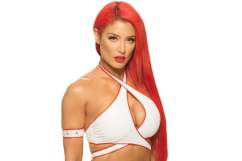