It may seem like a long way away, but the NFL Draft signals the 2017 NFL season is around the corner.

According to NFL Network, the Cowboys have the 10th toughest strength of schedule with 10 games against teams who finished above .500 in 2016.

The Cowboys will open the season at home against the Giants on Sunday Night Football. The game is expected to be on Sunday, September 10 at 8:30 p.m. Eastern. Fans could hear Tony Romo call his first game featuring his former team on November 5 as CBS broadcasts the Chiefs-Cowboys matchup.

The Cowboys will spend Christmas Eve at home against the Seahawks in a Week 16 matchup featuring two of the better teams in last year’s NFC. Dallas closes out the season on the road against the Eagles.

The Cowboys already knew their opponents but are waiting to see the order in which the games will be played. In addition to the Giants, the Cowboys will host the Eagles, Redskins, Rams, Seahawks, Chiefs, Chargers and Packers. Dallas goes on the road to take on the Giants, Eagles, Redskins, Cardinals, 49ers, Broncos, Raiders and Falcons.

The Cowboys will get a rematch with the Packers in Week 5 who narrowly knocked them out of the playoffs last season. In addition to their typical NFC East schedule, Dallas will play every team in the AFC and NFC North this season.

With the NFL Draft just one week away, check out Heavy’s latest Cowboys mock draft that makes predictions for every Dallas draft pick.

Here’s a look at the 2017 Dallas Cowboys schedule. 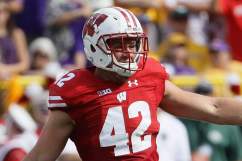