Lonzo Ball Full Highlights vs Mavericks (2017.07.16) Summer League – 16 Pts, 10 Ast, Injured?Become a monster. THE WORLD'S MOST ELITE JUMP PROGRAM: http://goo.gl/RctO1o Take your ball handling to the next level with the BALL HOG GLOVES http://goo.gl/rZRTwc —- Vintage Channel: https://goo.gl/PzMHpk My Twitter: https://goo.gl/EQbwXz My Instagram: https://goo.gl/1QF2zt —- All clips property of the NBA. No copyright infringement is intended. All videos are edited to follow the "Free Use"…2017-07-17T01:25:47.000Z

What has been a great summer league for Lonzo Ball could end on a down note. Ball left the Lakers semifinal matchup against the Mavericks in the third quarter with an injury.

According to ESPN, Ball was experiencing tightness in his calf, and did not return to action. Here’s a look at the play prior to Ball leaving the game with the calf injury:
VideoVideo related to lonzo ball: injury updates, stats & highlights in summer league semifinal2017-07-16T21:43:33-04:00

The Lakers defeated the Mavs to advance to the championship game on Monday. Los Angeles will take on Portland for the summer league title. No word yet on whether Ball will play. The Lakers could opt to be cautious with Ball, and hold him out of action.

Cameras caught Ball trying to get loose in the tunnel, but he appeared to be moving with a limp. Overall, it is nothing for Lakers fans to worry about as the injury does not appear serious. Ball returned to the Lakers bench, but it does put his status for Monday’s game in doubt.

It was a highly anticipated matchup with two point guards who were top ten picks. Dennis Smith Jr. has been one of the best players in summer league causing many to call him the steal of the draft. Ball and Smith Jr. battled until Ball’s calf flared up.

When Ball headed to the bench late in the third quarter, the Lakers had a comfortable double-digit lead. The Mavericks made a furious comeback in Ball’s absence, but the Lakers were able to narrowly hold them off.

Ball finished with 16 points, 10 assists and four rebounds before leaving the game early. According to NBA.com, Ball is averaging 16.4 points, 9.2 assists and 8.4 rebounds. His lone blemish has been his three-point shooting. Ball is shooting just over 20 percent from the three-point line.

Ball has battled nagging injuries throughout the summer. He found himself in a bit of controversy earlier in summer league when he missed a game with a groin injury. He would have been matched up against Kings rookie point guard De’Aaron Fox.

Fox got the better of Ball in the NCAA tournament as Kentucky eliminated UCLA, and Fox did not appear to be happy about the news of Ball’s absence.

Word came out that Lonzo Ball will miss tonights summer league game vs the Kings due to a groin injury, De'Aaron Fox responded with this pic.twitter.com/tKljIszbtE 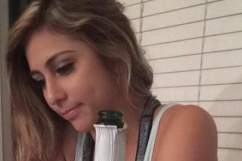