Getty Ahmad Brooks of the San Francisco 49ers tackles Todd Gurley of the Los Angeles Rams during the first half of their game at Los Angeles Memorial Coliseum on December 24, 2016 in Los Angeles, California.

Five days after he was cut by the San Francisco 49ers, linebacker Ahmad Brooks has agreed to a one-year deal with the Green Bay Packers.

The deal was first reported by NFL.com’s Ian Rapoport on Wednesday afternoon, and it’s a one-year, $5 million contract.

The #Packers are signing LB Ahmad Brooks to a 1-year deal that can be worth up to $5M, source said. Another(!) GB free agent signing coming.

Brooks met with the Packers on Wednesday morning and the two seemingly hatched a deal. He was due to make $4.5 million with the 49ers this season and gets a $3.5 million base salary with a chance to make $5 million, Rapoport tweeted.

The signing, which occurred less than two weeks prior to the start of the NFL’s regular season, is a rarity from Packers General Manager Ted Thompson, who often prefers to draft and develop as opposed to signing free agents.

According to LombardiDrive.com, Packers linebackers coach Winston Moss was very high on Brooks after he got cut by the 49ers, saying that he’d be able to do “everything that (the Packers) would ask him to do in (their) scheme.”

Brooks, a veteran who was a Pro Bowler in 2013, will assuredly enter the mix immediately and help shore up a linebacker corps that has largely been inconsistent as of late.

The Brooks signing is an indication that the Packers realize the need to further their depth at the position.

However, that experiment hasn’t come to fruition, as linebackers Jayrone Elliott and Kyler Fackrell, who were sought to fill the void, combined for just five tackles in three preseason games to go along with zero sacks.

Books, who brings an impressive resume to Green Bay, is likely to start the season playing behind Matthews and Perry. He was selected in the third round of the 2006 supplemental draft out of Virginia by the Cincinnati Bengals and payed two seasons there. After that, he found a home in San Francisco and had flashes of dominance. He’s registered 53.5 sacks, forced 12 fumbles and intercepted three passes in his career so far. 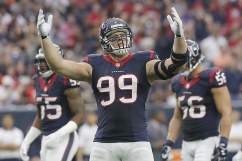