Novak Djokovic’s wife, Jelena Djokovic, is his high school sweetheart. Novak and Jelena have two children, Stefan and Tara. The couple welcomed their daughter to the world in September 2017. Novak spoke with Hello Magazine about what it was like seeing Jelena walk down the aisle at their 2014 wedding.

“Seeing her for the first time in her wedding dress, smiling and walking towards me… She looked like an angel,” Novak explained to Hello. “I was trying to be present in that moment and memorize it. I was focused on her, and her smile, and our baby. It really was a perfect moment.”

Children play a big role in the couple’s life. Not only does the couple have two children of their own, their foundation work focuses on Serbian at-risk youth. On his foundation’s website, Novak explained his passion for young people.

I’m coming from a war torn country, a place where many kids do not dare to dream big. I was blessed to have the support of my whole family while growing up. They believed in me and dreamed with me. Because of their trust, love and support, and all the hard work invested, I made my biggest dream come true. I’ve become one of the best tennis players in the world.

I want to help other kids as well to learn from my example that many things are possible if we only believe in ourselves and work hard to fulfill our dreams.

Jelena Djokovic is the proud mother of two children.

According to The Sun, Novak and Jelena met in high school, and first started dating in 2005. The couple got married on July 10, 2014. There had been rumors that the couple was going through a difficult time, but things appear to be going well as Jelena has been by Novak’s side at the 2018 Wimbledon tournament. Novak gave his wife a shout out on a recent Instagram post.

“4th anniversary of our marriage today. So much love for my soulmate. Thank you for sharing this wonderful journey of Life with me and our children,” Novak posted.

Jelena posted a lengthy message on Instagram in honor of her husband’s birthday.

I keep singing the song “Heaven” by Bryan Adams today. I get goosebumps thinking about “our younger years… there was only you and me, we were young and wild and free… ?….
Oh, once in your life you find someone who will turn your world around bring you up when you’re feelin’ down. Yeah, nothin’ could change what you mean to me
Oh, there’s lots that I could say
But just hold me now
Cause our love will light the way”
???❤❤❤❤❤ Happy birthday, my love! I’m one lucky girl, wife, mommy ???

With my angel baby girl ?? What are your favorite parks in Paris that we should visit while we’re here?! ??? #nature #paris #family

On September 9, 2017, the couple announced the birth of their second child. Novak welcomed their new daughter, Tara, to the world by posting a lengthy caption on Instagram.

Very happy and proud to welcome our little girl Tara to our home. Jelena and I have been hand in hand on this journey and as a man, I have to send my love and admiration to every single women out there for going through so much pain and effort to create life, to bring life and raise a human being… what a blessing to have an opportunity to be a parent! Thank you for celebrating the birth of my daughter and sending my family all the love and best wishes in the past few days. On behalf of me and Jelena, I want to say thank you! We are back from hospital, Jelena and Tara are my angels, and Stefan is a proud big brother who wants to take part in baby chores :) Life is divine!

The couple also has a three-year-old son, Stefan. He is pictured below getting ski lessons from his father.

Sometimes we get to be teachers to our little master Stefan ??? well done to daddy for being such a great support??? @djokernole

On a recent blog entry, Jelena described how their children continue to teach them new things as parents.

“But, our kids are masters of surprises,” Jelena wrote. “I can never emphasize enough that my children are my greatest teachers. Today was no exception. I came back home with a big lesson.”

3. Jelena Is the Co-Founder & Director of the Novak Djokovic Foundation

Jelena is the co-founder and director of the Novak Djokovic Foundation, and is heavily involved in shaping the direction of the non-profit. The foundation focuses on bettering the lives of young people in Serbia. Here’s how the foundation describes their work.

The Novak Djokovic Foundation is focused on Early Childhood Education (ECE) and Early Childhood Development (ECD).
Both prepare children as they progress through life and face new challenges. With the right support, any child can become a winner in the field of their choosing.

Not only does Jelena help with the business side of the operation, she also regularly writes on the foundation’s blog, often leaning on her experience as a mother. On one recent entry, Jelena detailed a trip to the museum with their son, Stefan.

4. Jelena Graduated From the International University of Monaco Where She Created a Student Magazine

The diploma and knowledge acquired at the prestigious universities, such as “Luigi Bocconi” and International University of Monaco (IUM), have given her the much needed assets to be an important part of the Novak Djokovic team, an executive of NDF (both on national and global level), and the director and founder of the student magazine Original- a start up of which she is very proud.

Jelena is also a mother to a 17-month old child. Early childhood education and development are very important part of her life and she is embracing them not only through her role of a mother but also through her work in the Foundation.

Jelena Djokovic at the 2018 Wimbledon tournament.

Jelena missed the 2017 Wimbledon tournament as she was pregnant with the couple’s second child. Some speculated there was more going on in their marriage, including former tennis player and commentator John McEnroe during BBC’s Wimbledon coverage (via the Mirror).

“Woods had the issues with his wife and then he seemed to go completely off the rails and has never been even close to being the same player,” McEnroe noted. “So we’re starting to say: ‘Wait a minute, is this possible with him, Djokovic?'”

Jelena admitted it is difficult constantly being in the public eye. She explained on an Instagram post how she has been criticized by strangers when Novak is not playing his best tennis.

I became a mom again in 2017, had quite a tough pregnancy but loving and supporting family to help me get through. I’ve been pointed at, shouted at and discriminated by unhappy people for my husband’s tough year… really not fun. Luckily, I have gone through all those challenges SANE and full of love. I wouldn’t change anything if I could. I would live it all over again because every moment I’ve lived was precious.
As Ryan Holiday says – Obstacle is the way. 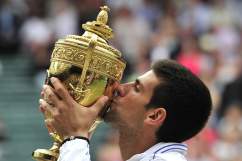 Wimbledon Purse 2018: How Much Prize Money Does Winner Make?