Leyla Ghobadi has been in all the latest news today for the Kim and Kanye camps. Today, the alleged mistress has launched a Twitter account to address fans, spectators and “false claims.”

Take a look at the top 10 Tweets that have come from the new account said to be Ghobadi’s and judge for yourself. Is it real or fake?

Set up twitter to show you guys what I’m really like. Not just doing this for ‘The Fame’.

Your friends would want to see this, share it!

@gossipcop And you know for sure my ‘allegations’ are ‘100% false’, really? Pathetic

“Ghobadi” insists that her claims are completely true and lashes out at unfavorable gossip.

Maybe I went about this the wrong way but how else am I meant to get thru to her? I am NOT the bad guy in this situation. nothing more 2 say

The account holder now claims to show a little regret on her approach to the Kanye situation. Would she do it all over again if she could?

It’s nice to see she says she’s sorry for how this may affect Kim Kardashian.

The woman will always get the blame for everything huh.

Here she appears frustrated with some of the backlash she is getting from her account viewers and the media.

@elle_sweetest He called me a week ago to hook up again. If I was pregnant with his child I would want to know

In this tweet “Ghobardi” specifically states that Kanye West called her last week to get together. This definitely raises eyebrows and possible doubt.

@deejayvenus Lack education? You know nothing about me. You’re judging me on a single decision I made which has been publicly misconstrued

Proof? Yeah because I was going to take pictures of myself fucking him. I could show u calls but I’m not about to put his number on twitter

Proof! The Ghobadi tweeter now claims she has proof on her phone, but will not release it. Hmmm …

The alleged Ghobadi admits her fault in the alleged infidelity, but explains Kanye West was very aggressive. She also confesses that she used to idolize the rapper. This tweet was later deleted. The below Twitter conversation may be the reason why.

@ahyahsonice1 I definitely did not mean it like that.

Okay I’m out. Said what I had to say. To the haters- u don’t know shit about the situation. Everyone else who’s being supportive; thank you. @the_misslyss I’ve said all I have to say.

Only Time Will Tell …

@deejayvenus I meant my decision to come out to the media about it. Stop trying to out smart me. Not gonna happen 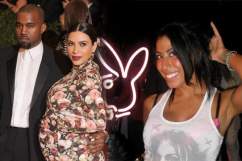