Could Eminem be getting back together with his ex-wife who he’s blasted through his music for years? It looks like it might happen, according to Kim Mathers’ mother. Radar Online reports that Kim’s mom Kathy Sluck reveals that Kim sees Eminem “all the time.” Plus, the rap star is supposedly building Kim a mansion only 5 miles away from his home. Sluck gives details on the couple saying:

They get along better than ever. He’s building her a new house on 22 mile right over there.

As far as Kim’s new digs are concerned, Radar reports:

The new house currently being built for Kim is on Mile Road in Macomb, Michigan, a rural suburb of Detroit surrounded by fields and farms. It is just a five-minute drive from the house she is living in now with her mother. Although still in the early stages of being built, the house already looks to be a large, sprawling mansion.

Eminem’s mother’s ex-fiance also had his opinion on the possible couple stating:

In my personal opinion they seem to have the type of relationship that will keep them coming back and forth to each other. I would say first loves always have a place in our hearts, I’m sure there’s still feeling there, you can’t just turn it off.

So, do you think Eminem and Kim will reconcile? 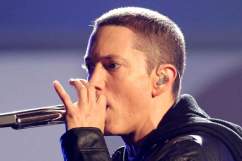 Read More
Celebrities, Eminem
Rapper Eminem has made a living bashing his ex-wife Kim Mathers, but it seems that the former couple may be reconciling ... Read on for details.