Wrestling Hall of Famer Johnnie Mae Young has passed away at age 90. Read on for the facts …

2. The WWE Has Released a Statement About Her Death

As expected, the WWE organization is saddened by the loss of their beloved Mae Young and has released a statement on their website. Below are a couple excerpts from it:

Johnnie Mae Young was truly one of the greatest female competitors to ever lace up a pair of boots. A proud competitor for three quarters of a century and valued part of WWE to her last day, Young truly blazed a path for future female grapplers beginning in the 1940s.

The entire WWE Universe offers a standing ovation to a true queen of the canvas and bids Mae Young a heartfelt farewell.

3. It Was Falsely Reported that Young Died Last Week 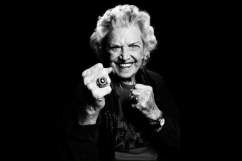 Last week on January 9, 2014, it was rumored that Young had died, but that was not the case. She was gravely ill at the time, but was still very much alive.

4. The McMahon Family Has Offered Their Condolences

#RIPTheOneandOnlyGreatMaeYoung A true pioneer and legend has passed tonight. Long live the memory of my friend and @WWE Hall of Famer.

Stephanie McMahon has posted a saddened tweet in addition to Vince McMahon offering his respects via his public relations director saying:

There will never be another Mae Young. Her longevity in sports entertainment may never be matched, and I will forever be grateful for all of her contributions to the industry. On behalf of WWE, I extend our sincerest condolences to her family and friends.

Clearly, Young has had a great impact on the wrestling community and all it’s become today.

5. Many WWE Superstars Are Paying Their Respects

Several members of the wrestling realm have come out to express their sadness over the death of Mae Young. Have a look at some of the thoughtful tweets.

The legendary Johnnie Mae Young has passed. The Oklahoman lead an amazing life. Her mental/physical toughness is an inspiration to all. RIP