With less monologuing and more politics bogging down the middle episodes of season 2, let’s see which one of the peripheral plot lines will shake things up. Will it be the tattooed congresswomen? The reporter turned hacktivist? Or maybe even the reformed call girl attending church? Lets take a look in this recap of season 2, episode 4:

1. The Anthrax Scare Locks Down the Capital

In reference to the foreshadowing of a “threat” against the President and Vice President in episode 3, this episode some poor innocent staffer in the Capitol building rips open a big envelope only to have white powder fly everywhere.

2. Frank Gets Locked in an Office With a Political Enemy

Frank is having holdouts to get his entitlement reform bill through the House of Representatives, and the only congressman who can save him is the one he screwed over last season on the education bill. The two are locked in an office together during the lockdown.

Ultimately, Frank finds a way to warm the congressman to his plan by appealing to his emotional side and talking to him about his sick wife. The situation only gets more desperate when the phone lines and internet are cut out and the two are forced to spend more quality time together. Finally Frank tries to solve the problem as he solves most problems, with some money and some favors, but this time his tactics are a little transparent.

3. Claire Does an Interview By Herself

When Frank gets stuck at the office, Claire is forced to do an interview by herself in order to make the couple seem a little more “human.” The interview starts out well, with Claire reminiscing about her home in Texas and how she met Frank at Harvard. She plays the part of politicians wife well, almost too well, and the interviewer eventually calls her out for her well polished answers.

This disconnect cuts to the very heart of Claire’s character. Last season she went behind Frank’s back to fund her own projects. To subject that ambitious Claire to the downgraded role of smiling wife in the background, must be hard for Claire and an arrangement that not many would, especially not the interviewer, would understand without it sounding malicious or calculated.

Then Claire reasserts her bravery and agency when she….

4. Claire Admits on TV that She Had an Abortion

Knowing full well that the admission could jeopardize her husbands political career, and even admitting that on TV, Claire still goes on record and talks about an abortion she had. The admission is politically risky but Claire knows it’s the right thing to do and, as she says, she has to be honest with herself.

When she gets on camera, rather than admit that she terminated the pregnancy while on the campaign trail because she and Frank didn’t want kids, she tells the interviewer she got pregnant as a result of a sexual assault. This brings it back to the odd plot point introduced earlier in the season where the viewer learns for the first time that Claire was raped in college. There she outs the General as her attacker and within minutes, other women are calling to reveal their abuse by the same man.

This shows the force of Claire’s character that over the course of an interview she can goes from the role of political wife to empowering crusader.

5. The Hacktivist is Working for the Government

So the true master behind Gavin, the master hacktivist is revealed to be the federal government. The government, obviously in some sort of deal with Gavin, is keeping him out of jail in exchange for his cooperation as an informant in the shady underworld of the internet.

Lucas then is walking into a big trap in which Gavin will trick him into pulling an act of cyber terrorism and then almost all of Frank’s loose ends will be tied up. 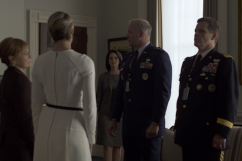 Read More
House of Cards, Netflix, TV
Here are the top highlights and spoilers of the season 2, episode 4 (aka Chapter 17).