It looks like a summer wedding is in the works for Dwyane Wade and Gabrielle Union.

The Miami Heat guard and the Being Mary Jane actress are tying the knot on August 30 in Miami.

The pair got engaged in December of 2013 after going through their share of ups and downs.

They seem to be stronger than ever and have overcome their tumultuous past.

1. They Put Out This ‘Save the Date’ Video

TMZ published the couple’s Save the Date video, which includes footage of Wade’s actual proposal.

The day he popped the question, Dwyane’s sons were holding signs that say, “Nikki will you marry us?”

In an interview on Live With Kelly and Michael, shown below, she dished, “He’s down on one knee, actually, he’s down on my yoga block ’cause he didn’t want his knees on the concrete.”

2. Dwyane Is Planning the Wedding

When discussing where she was with wedding preparations, she told Us Weekly:

We’re pretty deep. And by we, I mean he and the wedding planner. I’m at work. He realized that I was trying to turn it into a frat party with k-cups and beer pong, and he took over. He really Kanye’d himself and really doubled down, and it’s his princess day and I’m just along for the ride.

3. They Had Broken Up Because of Their Careers

The couple split in 2013 and she told Glamour:

(The breakup) was because of distance and scheduling. I finished filming the show. Then I flew to Vegas right away to start shooting Think Like a Man Too. I couldn’t take time off, and I missed some quality togetherness we desperately needed.

4. He Became a Father While the Couple Was on a Break

In December of 2013, the news broke that Wade had fathered a child with Aja Metoyer.

The baby was reportedly conceived while he and Union were on their break, but there’s also speculation to the contrary.

As the story surfaced, Wade was forced to make a public statement.
On December 30, he told reporters, “As I’ve always done my whole life … is always focus on what’s most important to me and my family, and that’s being a great father. I’ve always tried to show my importance in my kids’ lives and it doesn’t change now.”

On New Year’s, he captioned a photo with, “Brought the NewYrs in with my beautiful fiancé and great friends…2013 was filled with ups and downs…without them u can’t grow. So I’m better now becuz of them. 2014 I’m ready…#UnionWade.”

The Wade clan also consists of Zion and Zaire, who are Dwayne’s children with his ex-wife and high school sweetheart, Siohvaughn Funches, as well as his nephew, Dahveon Morris.

When I met Dwyane, his “resume” looked like crap: athlete, going through a divorce, nine years younger than me. None of that screamed, “Let’s have a lasting relationship.

However, she is happy she gave him a chance, and now can’t take her hands off of her basketball star.

I am almost a little Chester the Molester-y. I think he’s so delicious. Watching him get out of the shower never gets old. Never. It’s not like he ever wonders what I’m thinking, but usually he’s thinking, She needs a cold shower! 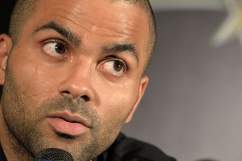