Ronnie told the magazine, “We were drifting apart and not really spending any time together.”

Take a look at their love story and tumultuous times.

The pair definitely brought the drama to Seaside with their makeups and breakups. In fact, #TeamSammi and #TeamRonnie hashtags trended on Twitter every Thursday night when the show aired.

Sammi and Ronnie go on their first date riding go-karts, but when Ronnie dances with another girl, Sammi gets revenge by flirting with a hot cop. She declares that she is “done” with Ronnie, the first such declaration in a series that will eventually number in the quadrillions.

In the video above, Ronnie calls them, “a dysfunctional Brad and Angelina.”

“Sam is somebody I’d consider marrying,” he said.

However, in 2013, Sammi dished to OK that the couple was nowhere near tying the knot. “We’re not rushing into getting married or having kids or any of that. We just want to enjoy our time together and enjoy life,” she said.

3. They Gave Others Relationship Advice

In this clip, they answer viewers’ relationship questions.

Their courtship had the complex aspect of being filmed for the world to see.

In 2011, Sammie told Complex, “I’ve maintained a relationship since day one, so for me that’s something that I was accustomed to. But it is difficult having a relationship, being on camera. I don’t think anyone understands really what goes on.

4. They Moved in Together

In 2013, Sammi told Wetpaint, “It’s going really well. The best part of living together is being able to relax and enjoy it without the stress of having cameras around. And because Ron and I have been living together since the start of Jersey Shore, we’re really comfortable with each other in our apartment.”

Ronnie told Wetpaint why they decided to take the next step:

We love each other and have been through so much, good and bad. We feel it’s the right time in our relationship to live together and get to know each other more. We’re really excited about it.

5. Sammi Moved Out Once When She Heard Ronnie Cheated

In August of 2011, Radar reported that Sammi moved out after seeing the second season of the show where Ronnie kissed other women. 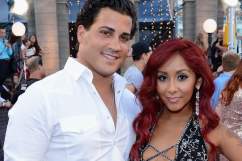