The last we heard, Janel Parrish had a boyfriend, but, by the looks of things on tonight’s DWTS results show, Parrish and dance partner Val may be getting a little close. The two kissed twice and Parrish told Val she loves him. Who thinks that there may be some behind-the-scenes chemistry going on? 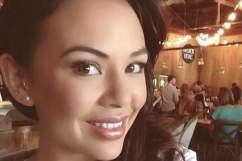