Eddie Murphy got the honor of receiving the Mark Twain Prize for American Humor at the Kennedy Center over the weekend. While accepting his award, he couldn’t help but joke about Bill Cosby. Check out the above video to see him poke fun at the comedian, starting at the 2:27 mark.

Bill Cosby received the honor in 2009 and after Murphy joked about the idea of Cosby having to give his award back, Murphy sprang into his Cosby impression, saying, “I would like to talk to some of the people who feel like I should give back some of my fucking trophies.”

According to Norm Macdonald, Murphy refused to do an impression of Cosby in February at the SNL 40th Anniversary special because he didn’t want to “kick a man when he’s down.” 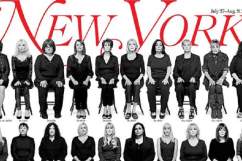