The identity of Shannon Beador’s husband David’s former mistress have been revealed by Daily Mail as Nicole McMackin. Shannon and David has been battling the aftermath of his eight-month affair, but recently celebrated their 15th anniversary together. David admitted to cheating on his wife with a 43-year-old business executive who was also married. In addition, she had befriended Shannon while the affair was going on.

It is reported that David Beador first was intimate with McMackin at an elite business club meeting for entrepreneurs in 2013. They had secret hotel encounters around Newport Beach and would go out to restaurants together as well.

Nicole and Shannon are reported to have met at their daughters’ basketball games and Shannon says Nicole would ask her about her relationship with her husband throughout the betrayal. McMackin is the President of Irvine Technology Corp, which is a firm that provides IT solutions and personnel. A source revealed to Daily Mail that:

Shannon first suspected David was cheating after catching him whispering to someone on the phone. Then in April last year – before filming had started for Season 10 of the show – Shannon decided to check David’s briefcase while he was out and she found hotel receipts stuffed inside. When he got back she confronted him and David admitted to an affair.

The source then dropped a bomb saying:

It turns out that Nicole purposely put her kid on Shannon’s daughter’s basketball team, a team that David coaches. The whole thing is upsetting for a lot of different reasons. They began talking during games and Nicole would ask her how her relationship was going. It just seems really underhanded and manipulative, almost as if she was probing for info to use to break them up. Or maybe she was just feeling guilty.

Nicole McMackin, who was also married, reportedly mended her relationship with her husband Reed McMackin as well. 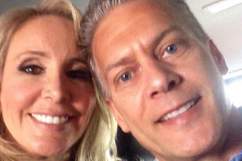