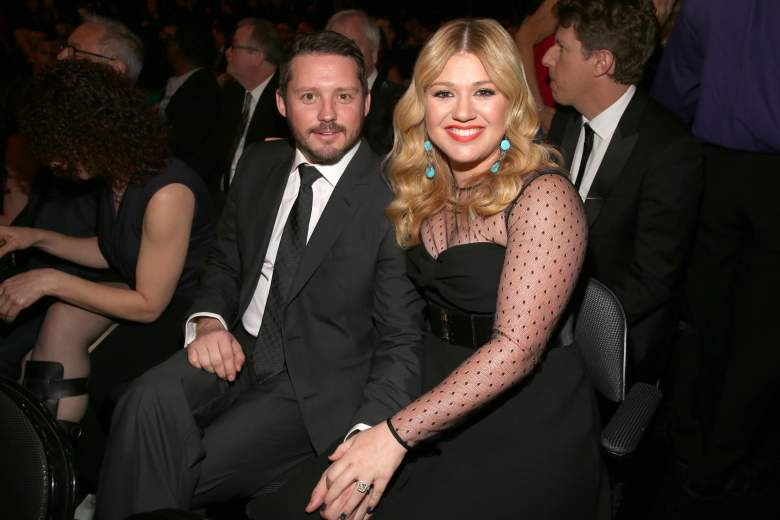 Brandon Blackstock and Kelly Clarkson welcomed their second child together, a baby boy, on April 12. (Getty)

Kelly Clarkson and her husband Brandon Blackstock welcomed their second child together on Tuesday. Clarkson gave birth to a son named Remington Alexander Blackstock. She made the announcement on Twitter.

Clarkson, 33, and Blackstock, 39, have a daughter, River Rose, who will turn 2 years old in June. He also has two children from a previous marriage. The new parents married in 2013.

1. Clarkson Gave Birth to a Healthy Baby Boy on April 12

Our little baby boy has arrived!! Remington Alexander Blackstock was born 4/12/16 & he is healthy & we couldn't be happier or more in love!

Clarkson announced via Twitter on Thursday that she had given birth to a son on Tuesday, April 12. She and husband Blackstock named their second child together Remington Alexander Blackstock.

For the second time, Clarkson struggled through her pregnancy. “I have to get IVs and fluids because I get so dehydrated. It’s really bad,” she told Gayle King on CBS This Morning in November. The rough pregnancy also forced her to choose between attending this year’s Grammy Awards or serving as a guest judge and giving her final performance on American Idol in its farewell season. She ultimately chose the latter.

“I obviously chose Idol because it’s ending and I was the original winner, so it’d kinda be weird if I wasn’t there,” Clarkson explained On Air with Ryan Seacrest. She gave an emotional performance of the title track from her seventh studio album, Piece by Piece, that had judges Keith Urban and Jennifer Lopez in tears.

2. Clarkson and Blackstock ‘Couldn’t Be Happier or More in Love’ With Their New Baby Boy

Blackstock and Clarkson are thrilled for their newest addition. (Instagram/@kellyclarkson)

The new mom is already gushing over her newborn. In the tweet announcing his arrival, Clarkson wrote, “He is healthy & we couldn’t be happier or more in love!”

Remington also got some love from his older step-sister Savannah who welcomed the new baby on her Twitter. Savannah is the oldest of Blackstock’s two children with his ex-wife, Melissa White. They also have a son, Seth.

White and Blackstock still share a healthy relationship. She is remarried and the two couples spend time together.

“I love Kelly and we get along great, and my husband and I hang out with them all the time,” White told RadarOnline.com in 2014.

3. She Announced Her Pregnancy During a Concert in Los Angeles in August

Clarkson revealed her second pregnancy during her concert at the Staples Center in Los Angeles last August. She had trouble gathering herself before singing the personal ballad, “Piece by Piece,” and broke down to tell the audience she was expecting, according to People.

I was not planning on announcing this, but … I’m totally pregnant. I’m having a really hard time. I’m gonna nail the s— out of this song. That was not how I wanted to announce that … I hate this song right now. My makeup artist is backstage hating me right now. I just don’t want you to think I’m on pills or drunk.

After performing the song, she apologized to her husband.

I’d like to apologize to my husband. That was not planned. I just didn’t want you to think I was crazy or something. Honestly, I’m just so hormonal today. … I haven’t vomited yet. That is a freakin’ win, y’all.

Clarkson gave birth to her first child, daughter River Rose on June 12, 2014. At less that 2 years old, the adorable little girl has already become a viral sensation. Her mom teased her single “Heartbeat Song” with a video of her little girl bopping along to the song wearing oversized headphones.

River also gave a cute send off to American Idol on the night of its farewell. The Fox singing competition show launched her mother’s career in 2002. Clarkson’s daughter was also there the day of her final performance on the show, which made it even more difficult for the singer to make it through the song, she told Ellen DeGeneres on Ellen.

“My little girl was there. My little boy is turning circles in my stomach. It was nostalgic. It was the last time I’m ever going to be on ‘Idol’ and it’s ending. I was screwed from the get go,” she said, laughing.

5. Clarkson Married Blackstock After They Were Re-Introduced at the 2012 Super Bowl

I'm officially Mrs. Blackstock :) We got married yesterday at Blackberry Farms in TN, the most beautiful place ever! pic.twitter.com/vYYqopBAcr

Clarkson and Blackstock married in October 2013 at Blackberry Farm in Walland, Tennessee. The couple originally planned a big wedding, but decided to elope and exchanged vows in front of Blackstock’s two children instead. Clarkson was worried her mother would be disappointed in her little girl not having a big wedding, but she just wanted her daughter to be happy.

“I thought my mother was going to be [disappointed] because I’m her baby,” she told ABC in 2013. “I thought that was going to be weird but she totally got it. She actually responded, ‘I’m just happy I don’t have to buy a dress!'”

She and her husband got engaged in December 2012 after his father, Narvel Blackstock, who was Clarkson’s former manager, reintroduced them at the Super Bowl earlier in the year. She had known him for six years prior, but he was married at the time.