Atlanta is the new show starring Community's Donald Glover, who also created and executive produced the show. It debuts on FX Tuesday, September 6 at 10 p.m. with two episodes.

The show also stars Brian Tyree Henry, Lakeith Stanfield and Zazie Beetz. Flight of the Conchords writer Paul Simms (seen in the above photo on the right) is an executive producer, along with Dianne McGunigle. The basic premise of the series finds Glover and Henry playing cousins hoping to break through in the Atlanta music scene after Henry's character releases a successful mix tape. Glover stars as a Princeton drop-out who wants to be Henry's manager.

The show has been in development since Glover left Community in 2014. Since then, he's starred in The Martian and Magic Mike XXL. "I guess it could have happened faster, maybe if I wasn't doing so many other things. But in general, I think it's just like people are more aware of the process, so it's different. But also, I like taking my time. I don't like to be rushed at all," Glover told Business Insider.

Click through for a look at each member of the cast and their roles. (Getty) 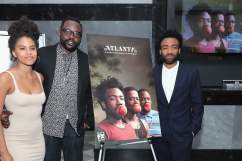 ‘Atlanta’: What Time & Channel Is Donald Glover’s New Show On?