Trial & Error is the new NBC sitcom that's in the same vein as Parks & Recreation and The Office. Created by Jeff Astrof and Matt Miller, the show stars John Lithgow as Larry Henderson, whose very name is nod to Lothgow's Harry and the Hendersons. When Larry is accused of murdering his wife, New York attorney Josh Segal (Nicholas Do'Agosto) heads to South Carolina to defend him. But Larry might have actually killed his wife and the people in the tiny town Josh is stuck working with aren't exactly helpful.

Like other Midseason shows, NBC is trying to burn this one off quickly, meaning that it probably doesn't have much confidence in it finding an audience. Hopefully the network is wrong because this is a fantastic cast. After the first two episodes air on March 14 at 10 p.m. ET after the This Is Us finale, the show moves up an hour to air after The Voice. Season one will be over on April 18 because NBC will continue airing two episodes a week.

Lithgow (left) is a two-time Oscar nominee for his supporting roles in The World According to Garp and Terms of Endearment. He's been much more successful at winning TV awards, as the owner of two Golden Globes and five Emmys. He'll likely get a shot at a sixth Emmy for his performance in Netflix's The Crown. Click through to meet his Trial & Error co-stars. (Photo by: Tyler Golden/NBC) 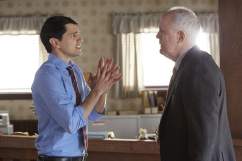 ‘Trial & Error’ Series Premiere: What Time & Channel Is the New Comedy On?

Read More
John Lithgow, NBC, TV
John Lithgow stars in Trial & Error and is joined by a great cast for a sitcom. Meet the other stars in this crime mockumentary from NBC.