UPDATE: Better Call Saul may have just been renewed with little fanfare and without a big announcement. Production Weekly announced that the fourth season was set to begin in November. Meanwhile, the show creators have said that they are confident there will be a renewal.

Tonight is the season finale of Better Call Saul and, sadly, we’ll have to wait until 2018 to find out what happens next — provided the show is renewed. Unfortunately, as of the time of publication, AMC has not announced if Better Call Saul is renewed or not yet.

It’s been a roller-coaster ride for fans this season. We were completely on Jimmy’s side when the season began. But after how he treated Irene last week, many fans have jumped ship and are saying that Jimmy has officially turned into “Saul” in their eyes. But fans aren’t blinded to the many problems brought by Chuck, either. Just because Jimmy did some things that fans are angry about doesn’t mean that Chuck gets a free pass either.

So how long will you need to wait before seeing the next chapter in Jimmy’s saga?

Although we don’t have an exact date yet for when Better Call Saul Season 4 will begin, if it’s renewed, we can make some guesses based on the past. And unfortunately, those guesses lead us to believe that if the show is renewed, we won’t be seeing anything until 2018. Season 1 began filming in June 2014 and premiered February 2015, nine months later. Season 2 got a renewal announcement in June 2014, but its first episode aired in February 2016. And Season 3 got an early renewal announcement in March, but the first episode didn’t air until April 2017.

If Better Call Saul Season 4 keeps with this slightly unpredictable schedule, we’ll likely see next season’s premiere sometime between February and April of 2018. However, the wait on renewal news might mean that a premiere would be pushed back even later next season than it was last season.

The biggest question right now is not so much when the show will air next season, but if the show will be renewed. Unfortunately, ratings haven’t been great. In the 18-49 demographic, it started out at .70 for the premiere (1.8 million viewers), fell to the .5 range, and then grew to .67 on May 22. But the numbers fell on June 12 even more, down to .45. During its second season, the show averaged a .89 rating in the 18-49 demographic: much higher than it’s been averaging this season. This downward trend certainly won’t help renewal chances. However, not everyone sees the ratings as bad. Cinema Blend wrote a glowing story about how good the ratings are when you consider DVR viewings too.

We do know that Bob Odenkirk and Vince Gilligan are on board for more episodes. Odenkirk told Vanity Fair in April that he thinks the show could go as long as Breaking Bad did (five seasons), but it probably wouldn’t feel right if it went any longer than that. Gilligan, however, said that he thought it could go even longer than Breaking Bad. He said: “I’m not saying it will; it may well not. But I think there’s potential here, if only for a very mechanical bit of reasoning on my part which is that the main character does not have lung cancer. He was not presented with a death sentence.”

Considering the great history Gilligan has with AMC and how much he has done for them, it seems unlikely that AMC will cancel Better Call Saul now. It’s more likely that the renewal news is coming later because the show is behind its schedule last year, airing a full two months later than last year. 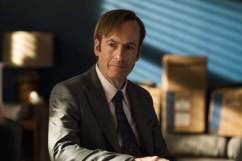