When watching Netflix’s new Wet Hot American Summer: Ten Years Later, you will notice one big absence. Bradley Cooper, who played Ben in both the 2001 movie and the First Day at Camp prequel series, is nowhere to be found! Where is Cooper and who replaced him? Read on to find out.

Ten Years Later is set in 1991, 10 years after the film took place. The movie ended with Ben suggesting the Camp Firewood gang reunite in 10 years, so it’s a little ironic that the actor who played the character couldn’t be there for the reunion. Instead, Adam Scott plays Ben. As you can see in the clip above, he tells Susie (Amy Poehler) that he fixed his “deviated septum.” She even says he looks better than before!

Co-creator Michael Showalter, who plays Coop in the franchise, confirmed to Entertainment Weekly in July that Scott is playing Cooper’s character.

“I like unapologetically just swapping out the actor,” Showalter said. “The idea that seemed so silly was that he had a nose job and is worried that people won’t recognize him, and the joke is that everybody recognizes him completely and says that you can barely notice it. Essentially what we’re saying is: If Bradley Cooper got a nose job, he would look like Adam Scott.”

Cooper didn’t comment on the switch, but co-creator David Wain told EW that Cooper thought the switch was funny and would be interested in returning to Wet Hot American Summer if there’s another series.

Scott is a big fan of Wet Hot American Summer and his addition to the franchise means we get a Ben Wyatt and Leslie Knope reunion! Scott and Amy Poehler both appeared on the beloved NBC series Parks and Recreation.

“The character’s name is Ben [like in Parks], so we did have a moment where we see each other and she screams ‘Ben!’” Scott told EW of the first time he saw Poehler on the set. “And we were both like ‘Whoa, okay. Hold on.’”

Cooper couldn’t work on Ten Years Later because he was making his latest project, a new version of A Star Is Born that co-stars Lady Gaga, who will be credited using her real name, Stefani Germanotta. The film is movie opens on September 28, 2018. It marks Cooper’s directing debut. 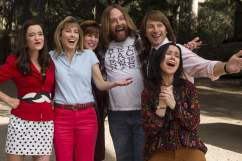 ‘Wet Hot American Summer: Ten Years Later’: When Is It Released on Netflix?

Read More
Netflix, TV
Bradley Cooper is missing from Wet Hot American Summer: Ten Years Later. Find out why he isn't in the show and who replaced him.