Getty Jeffree Star was one of those who commented about the YouTube crash.

Several years ago, makeup vlogger and beauty influencer Jeffree Star made some hateful, racist comments, that came back around years later. In 2016, Star got into an online feud with Kat Von D. According to Revelist, Von D took to Instagram to accuse Star of “inappropriate behavior (including promoting drug use, racism, and bullying)” — and she had proof.

Below are some things that Star has said. They were posted in a YouTube video compilation that has since been removed from the internet.

“I win by having diamond rims, you win by being a poor Mexican.”

“You say black folk cannot wear MAC Cosmetics, and then you splashed acid in her face.”

“Well maybe if she wasn’t wearing the wrong foundation color, I wouldn’t have HAD to splash no battery acid to lighten her skin tone, girl.”

In a 15-minute long YouTube video, Star apologized for these comments. You can watch the video below.

This was all brought to light on Monday night when Kim Kardashian brought up Star’s past in a Snapchat video.

“I get it’s a serious deal if you say racial things, but I do believe in people changing, and people that apologize, I will give them the benefit of the doubt. I know better than anyone that I hate when people bring up my past or mistakes I’ve made in the past. So let him live. I want to make one last thing clear, I do not defend people that are racist and I am very against it. But if someone claims that they have changed, I would love to give them the benefit of the doubt, and I pray to God that they do change for the sake of my children and my friends,” Kardashian said. 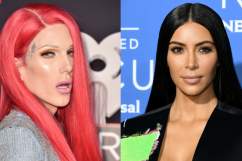