Tonight, Kodak Black will release his second studio album Dying to Live. The album has been teased since the release of Black’s debut, Painting Pictures, and was preceded by the singles “If I’m Lyin’ I’m Flyin’” and “Zeze” featuring Travis Scott and Offset.

Dying to Live will be released at 9 p.m. PT on Thursday (Dec. 13) or midnight Eastern on Friday (Dec. 14) depending on your time zone. We’ve listed the different platforms that the album will be released on, and the ways in which you can listen to them below.

You will be able to stream Kodak Black’s new album on iTunes and Apple Music. If you have an Apple Music account, you can go into the app on your phone or tablet and set the notifications to alert you when the album is out. Click here to learn how.

Based on the standard release schedule for Spotify, Kodak Black’s Dying to Live will also be available to stream on the platform. If you don’t have a Spotify account, you can sign up for one here and pay only $0.99 for the first three months.

Kodak Black’s album will also be available to listen to on Tidal. The streaming service offers a free 30-day trial with Tidal Premium, which provides  access to music videos and curated playlists.

Dying to Live follows Kodak Black’s other 2018 release, Heart Break Kodak. It will be his first studio release since being released from prison on August 18. The rapper announced that the album was coming with an Instagram post that read: “Yung N**ga Been Getting Money. I Did Everything The Streets Glorified #AlbumDropping Next Month.” The post has since been deleted.

Black released the official tracklist for Dying to Live on December 11. The album includes production from Jake One, Major Nine, and Southside; and guest verses from the likes of Lil Pump, Juice WRLD, and the aforementioned Travis Scott and Offset. Check out the full tracklist below.

Black, 21, was recently embroiled in a controversial interview with Hot 97’s Ebro. The latter invited Black on to discuss the upcoming album, but when pressed about his pending sexual assault charges, Black refused to answer any questions and walk out.

“You know, looking at all your cases and everything you’ve been through, and I know the recent one right now is very sensitive,” Ebro said. “And with respect to everybody involved in that case, we can’t get into details today. But, you know, we take sexual assault here serious. We can’t get into details, but we hope to have you back, so that we can have a deeper conversation about that. Because it’s a serious topic and we’re hearing these stories a lot.”

When Ebro asked if Black wanted to stop, the rapper took the offer and left. Watch the interview above. 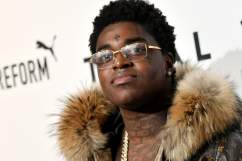