The “Jersey Shore” cast has revealed new details about Nicole “Snooki” Polizzi’s return to the show after missing the first half of the season.

The longtime MTV star famously quit “Jersey Shore” in 2019 amid the controversy following a mean-spirited bridesmaid’s speech that she, Jenni Farley, and Deena Cortese delivered at Angelina Pivarnick’s wedding. Snooki also told the AV Club that the once-fun reality show got “too heavy” and the mean girl drama was “mentally draining”  for her.

But earlier this year,  TMZ posted a photo of Snooki filming with co-star Angelina Pivarnick at Lucco Cucina + Bar in Florham Park, New Jersey, and promos for Season 4B have heavily teased her return to the show.

Jenni Farley Revealed That Snooki’s Conversation With Angelina Got Crazy 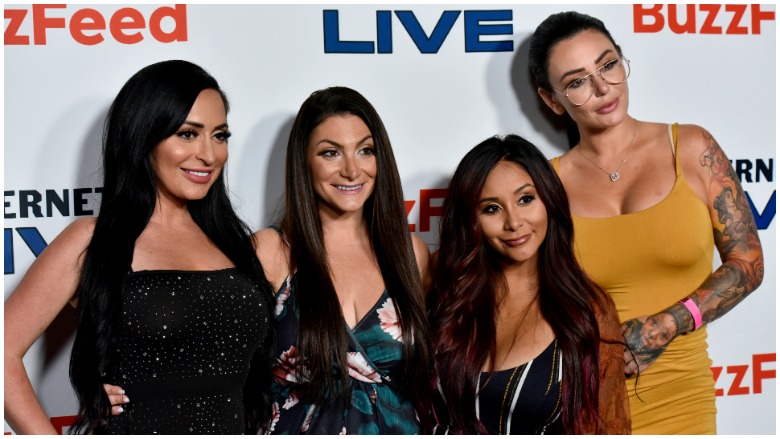 Snooki and Angelina were not on speaking terms following the wedding drama, so their on-camera sitdown was truly the first time they had seen each other in more than a year. In an interview with TooFab, Angelina noted that she “obviously didn’t leave off on the best terms” with the Snooki Shop owner, but that she “definitely” wanted to have that on-camera conversation with her.

“I kind of just had my own, in my own head what I was gonna say with her, what I wanted to hash out with her,” Angelina explained.

Jenni “JWoww” Farley chimed in to give a bigger teaser about the meet-up, which sounds like it will be must-see MTV.

“The way that they talked to each other was wild,” Jenni said of her two co-stars. “It’s probably my most favorite part of the season that I’m looking forward to, is when they get together and have a conversation. I just think it just got reckless, which is what I loved the most about us.”

Filming for much of the new season of the MTV reality show took place at a resort in Pennsylvania’s  Pocono Mountains. While Jenni wasn’t totally shocked that Snooki agreed to come back, she was caught off guard when her pal finally made her grand entrance, which can be seen in the Season 4B promo.

“You can see in the preview we were truly shocked,” Jenni said. “I had no idea it was going to be that for Mike’s sober anniversary party and beyond excited and happy of how it happened.”

Jenni also revealed that Snooki was well aware that she and Deena Cortese did hash things out with Angelina on-camera after their own lengthy estrangement. In fact, the two besties were on Facetime together right before JWoww agreed to talk to Dr. Drew Pinsky about the Angelina drama when the first half of the season taped in Las Vegas.

“I truly kept her up to date with every section of what I was doing because she is our best friend and she wanted to know just as much as I did,” Jenni said. “So I’m venting to my boo, so she kinda knew everything before it aired.”

It’s not a surprise that Snooki stayed in the loop throughout her “Jersey Shore” hiatus.  Her co-star Pauly DelVecchio previously told Us Weekly the mom of three has a “super” fear of missing out.

“She’s in the loop on everything,” he said before Snooki’s return was confirmed. “So, to me, it feels like she didn’t quit. She’s there.”