The major Bravo news on August 5 was that Melissa Gorga and Joey Gorga would not be attending Teresa Giudice’s wedding this weekend amid rumors of a major fight at “The Real Housewives of New Jersey” finale party that was filmed this week.

In the aftermath of the news breaking, it seems as though the RHONJ couple and Melissa Gorga’s family opted against laying low over the weekend and instead posted several loaded messages on social media.

According to their Instagram Stories, Melissa and Joe Gorga attended a big get-together with Melissa Gorga’s family. One of the photos posted to social media by Melissa Gorga’s older sister Lysa Simpson showed the family posing by the pool with the caption, “This is us.” Joe Gorga shared the photo on his Instagram Story and added the fiery caption, “Blood doesn’t make you family.” 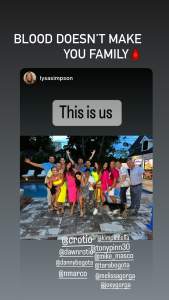 It wasn’t the only veiled reference to Giudice and her weekend nuptials to Luis Ruelas as another video made the rounds on social media which seemed to show one of Gorga’s family members yelling, “This is what a real family does.” That video has been saved by the Instagram account bestofbravo.

Joe and Melissa Gorga were both ripped on social media for their comments, with a thread on Reddit filled with criticisms for the RHONJ couple. “This is weird, even if you’re not going just lay low and don’t try to upstage a wedding lol,” someone wrote. Another added, “However you feel about Teresa, this is a f***** up thing to do on the eve of her wedding. Solidifies how terrible they are.”

One person commented, “It’s petty on kind of a malicious level. How as a mother and family are you gonna be like yeah, let’s publicly tease and try to cause a stir on Tre’s weekend and ruin it for her. Even if they’re your true sworn enemy for some good reason like WHY?” Someone said, “She’s showing how much she cares by pretending how much she ~doEsN’t CaRE- Jennifer aydin was right, Joe Gorga is a little b**** boy.”

Someone commented, “It’s giving major ‘look at how much fun we’re having?! See?!’ Vibes. While they probably s*** talked Teresa’s wedding all night. Super pathetic and try hard of them.”  Another agreed, “Exactly. So bitter.” Someone else wrote, “We all know this ‘party’ is only happening to try to shade Teresa. So pathetic and sad.” On Twitter, someone wrote, “It’s one thing to not go because you’re in your feelings but publicly shady your sister‘s wedding the night before… trash.”

The news of Joe and Melissa Gorga skipping Giudice’s wedding was reported by Page Six, who said a source shared that “There was a very tense ‘Housewives’ finale filmed earlier this week.” The ladies attended a Roaring 20s-themed party at the home of Dolores Catania’s boyfriend for the finale, according to several of the cast members’ Instagram photos.

Page Six’s Eileen Reslen later tweeted, “The #RHONJ finale blowout fight that caused Melissa and Joe not to attend Teresa’s wedding was due to Teresa pushing a rumor about Melissa that would ’cause drama’ in her marriage to Joe, a source tells me.”

None of the RHONJ ladies or Joe Gorga have addressed the rumored fight publicly at this time but one of the Instagram Stories posted by Melissa Gorga’s cousin Nicholas Marco hinted at the rumor as he posted a photo of himself kissing her cheek during the party and wrote as the caption, “I’m the only other boy this girl kisses” with a wink emoji and the hashtag “that’s a wrap.” Here is the clip:

Melissa is so stuck on herself it makes me nausea every time she opens her mouth! She was probably butt hurt because she wasn’t in the wedding party. After all doesn’t our world revolve around her. She wouldn’t be on that show if wasn’t for Teresa and her p***y whipped husband. Get a grip Miss I’m so pretty!!!

They were fame whores from the beginning. They sleezed their way into the show. Teresa had no idea that they were joining. I truly believe that has been the base of ALL of the drama. They couldn’t let Teresa have the spot light. Remember how they seeds and ruined some of Teresa’s long time friends. Neither would be there if it weren’t for Teresa period. Maybe they should be a little more grateful because in reality, if they pull from Teresa they may not be welcomed back to the show. Last seasons Melissa’s story line was her daughters reluctance to get back into cheering. LAME!

From what I have read, the fight was because Teresa supposedly spread a rumor about Melissa . The thing was, Teresa and Louis discussed it with Joe off the air and Melissa and Joe brought it up on air. Their fame whores. They would not be on that show if not for Teresa. I have to say though Teresa has gotten more self serving, hopefully married life will ground her again. If Teresa leaves the show will go downhill. Whether or not you like her Teresa is NJ.

What the Gorga’s are supposed to stop living their lives. Tre needs the drama. She thrives on it. Won’t get away from it. I say way to go Joe—- carry on!

Loading more stories
wpDiscuz
6
0
Would love your thoughts, please comment.x
()
x
| Reply
Joe Gorga and Melissa Gorga were slammed by fans after their recent comments amid news that they wouldn't be attending Teresa Giudice's wedding.