ABC Tayshia Adams and Kaitlyn Bristowe on The Bachelorette: Men tell All.

Kaitlyn Bristowe is being called out for putting Tayshia Adams on the spot during the “The Bachelorette: Men Tell All” special.

In the middle of the update of Michelle Young’s season of the ABC dating show, Kaitlyn turned to her co-host Tayshia Adams and asked her about her recent split from her fiancé, Zac Clark.

Kaitlyn noted that Tayshia was no longer wearing her engagement ring and then asked her what was going in with her relationship with Zac.

“All in all, all I have to say is that I’m heartbroken,” a tearful Tayshia replied. “We tried really hard and I still love him very much. I’m not sure what the future holds. You know how it is… It’s really tough.”

Kaitlin then offered her friend support before introducing Michelle Young’s rejected suitor, Rodney Matthews, by saying, ‘From one broken heart to another….”

As Rodney took his seat on stage, Tayshia broke down in tears and ran backstage.

Viewers were caught off guard by the segment. On social media, some wondered why Kaitlyn would bring up Tayshia’s personal turmoil in the middle of Michelle Young’s “Men Tell All” episode.

“I feel like Kaitlyn is normally very good at being empathetic, but I hope she watches that back and realizes how it came off. Tayshia didn’t deserve that at all,” one Twitter user wrote.

“’From one broken heart to another’ KAITLYN SWEETIE NO WONDER TAYSHIA RAN OFF THE STAGE CRYING #bachelorette #thebachelroette #mentellall,”  another tweeted.

“Kaitlyn really just made Tayshia cry and then was like COME ON UP RODNEY,” another wrote.

“Who tf does Kaitlyn think she is asking Tayshia about her break up with Zac and then USING IT AS THE TRANSITION TO BRING UP RODNEY???” a fourth fan asked.

“I’m confused…what was the purpose of making Tayshia break down and cry? Why did y’all randomly bring up her pain??” another wanted to know.

“There was no reason to air this. Everyone already knew they broke up because it was released days ago. This is not the Kaitlyn & Tayshia show,” another tweeted.

Others defended Kaitlyn and pointed to ABC and “The Bachelorette” producers for the segment.

“Do not blame Kaitlyn! You better look right at  #ABC. Both are the host and both are friends, she’s being supportive of Tayshia! Also I’m sure Tayshia knew she was going to talk about it. Kaitlyn wouldn’t put her on the spot like that,” one fan wrote.

“Tayshia knew about it, “ another agreed. “They were doing what producers told them to do. Do you not realize Kaitlyn is not a producer? Has no control over any of this and reading from prompter? Go be mad at ABC and producers, not the ‘hosts’ who have no control.” 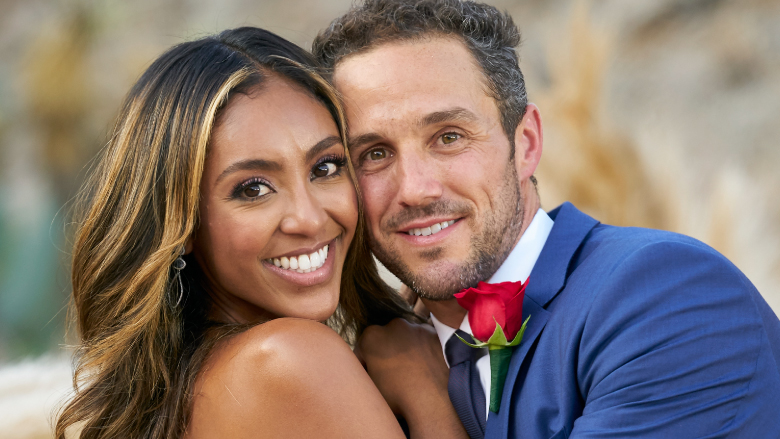 ABC/Craig SjodinTayshia Adams and Zac Clark got engaged on ‘The Bachelorette.’

Tayshia, 30,  and Zac, 37,  were engaged for more than a year before ending their relationship in November days after cheering each other on at the New York City Marathon.

“Tayshia Adams and Zac Clark are no longer a couple,” a rep told People in mid-November.

While the exes had not publicly talked about their split ahead of Tayshia’s “Men Tell All” moment, an insider told Page Six that “as time went on, it became more evident that Tayshia and Zac weren’t going to work out.”

“They have very different plans for the future,” the source said. “It’s sad, but also a relief for both of them to finally accept that they aren’t a good match. “Her star is rising so fast and he isn’t completely comfortable with the limelight.”