Tory Lanez has come forward and addressed the shooting accusations against him regarding Megan Thee Stallion on Instagram Live. He initially addressed the claims against him on his album, Daystar, but on October 20, 2020 he spoke about the allegations directly.

He also said that he wasn’t going to “bash” Megan Thee Stallion but he couldn’t allow for his “character to be assassinated” and “everything that I worked for to get here to just be assassinated for something I did not do.”

In the video, the 28-year-old Canada native denied that he shot the “WAP” rapper.

“It’s crazy because the whole thing about it is — when this whole debacle, or whatever you call it, came about, the whole time was like … She knows what happened, I know what happened, and we know that what you’re saying and what the alleged things and the alleged accusations of my name is [sic] are not true.”

He added that despite her claims against him being “falsified information,” he he still considers her a friend.

“It’s false information and it’s not accurate information,” he said. “I don’t ever wanna come off like I’m here to bash this girl or I’m here to talk down about this girl or ever be at a place where, like, I’m disrespecting her, because to me, as a person, she’s still my friend. No matter what — even if she doesn’t look at me like that — I look at her like she’s still my friend.”

He also addressed the timeline of the accusations, the inconsistencies he feels are in Megan Thee Stallion’s account of what happened that July night, people feeling that the timing of his Daystar album release was disrespectful to Breonna Taylor and why he waited three months to make a statement. See below: 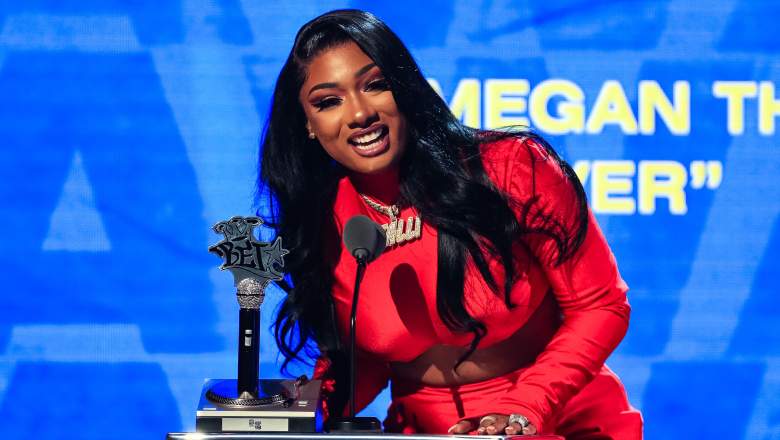 GettyMegan Thee Stallion was leaving Kylie Jenner’s house when she was shot.

The Houston hottie went on Twitter after Lanez’s ended his Instagram Live and addressed his claims. She kept her response to him short and sweet by tweeting: “This N**** genuinely crazy.”

The 25-year-old rapper wrote an op-ed for the New York Times where she spoke out even further about the incident as well as why she is so vocal about Black women needing to be protected.

I was recently the victim of an act of violence by a man. After a party, I was shot twice as I walked away from him. We were not in a relationship. Truthfully, I was shocked that I ended up in that place.

My initial silence about what happened was out of fear for myself and my friends. Even as a victim, I have been met with skepticism and judgment. The way people have publicly questioned and debated whether I played a role in my own violent assault proves that my fears about discussing what happened were, unfortunately, warranted.

On October 7, Lanez was charged with one felony count each of assault with a semiautomatic firearm and carrying a loaded, unregistered firearm in a vehicle, according to a news release from the Los Angeles District Attorney’s Office. If he convicted of these charges, could be sentenced up to 22 years in prison.

After the charges were announced he continued to maintain his innocence of social media.

“[Time] will [tell],” Lanez tweeted. “And the truth will come to the light … I have all faith in God to show that…love to all my fans and people that have stayed true to me & know my heart … a charge is not a conviction . If you have supported me or meg thru this, I genuinely appreciate u.”