King Bhumibol Adulyadej of Thailand, who had been the world’s longest-reigning monarch, has died at the age of 88, a statement from Thailand’s royal palace announced on Thursday. With his passing, his son Crown Prince Maha Vajiralongkorn has been named the country’s new king, Thailand’s prime minister declared.

But unlike his beloved father, who was revered as an almost divine figure by the Thai populace and whose calm presence guided Thailand through decades of political turmoil and more than a dozen military coups, the 64-year-old Vajiralongkorn has been embroiled in a scandals and questions about his fitness to occupy the throne.

Here’s what you need to know about Thailand’s next king.

1. He Says He Wants to Wait Before Becoming King

The heir to the Thailand throne is Maha Vajiralongkorn, Crown Prince of Thailand (age 64) pic.twitter.com/aKwX9WtjXN

While Thailand has declared an official mourning period of one full year to honor the late king, and the government has asked for all entertainment activities in the country to be “toned down” for the next 30 days, Vajiralongkorn also made the unusual request to wait before he is crowned king.

The Crown Prince’s official reason for the delay was that he desires a period of time to mourn his father along with other Thais. But his scandal-ridden history has experts questioning whether he wants to serve as king at all.

2. He Was Caught on Video Partying With His Half-Naked Girlfriend

In 2001, the Crown Prince and his then-consort, or girlfriend, Srirasmi Suwadee apparently held a birthday party for their pet poodle, Foo Foo, during which Srirasmi dined and sang “Happy Birthday” to the dog while topless, clad only in a G-string as she and the prince are attended by servants wearing white gloves.

A video of the decadent bash leaked online in 2007 and circulated privately, in a country where criticism of the royal; family can carry severe criminal penalties — up to 15 years behind bars. But coming shortly after a coup that unseated popular prime minister and billionaire business tycoon Thaksin Shinawatra, the video created a scandal for the crown prince.

He married Srirasmi in December of 2001 and they had child together in 2005.

In 2009, WikiLeaks also posted the video, which received a renewed round of publicity in 2014 while Thailand was in the midst of its latest military coup.

3. He Has Been Married Three Times (At Least)

While little was reported about Vajiralongkorn until recently, when his father fell ill and it became clear that he would soon ascend to the throne, he is known to have been married at least three times — each one tumultuous. His marriage to Srirasmi, a former bar waitress, ended last year after eight of her relatives were arrested and sentenced in corruption scandals, culminating in the arrest of her parents on charges of insulting the king and queen.

In his first known marriage he wed a cousin and fathered one child with her. At the same time, however, the crown prince was having an affair with an aspiring actress — and he fathered five more children with her before finally getting a divorce and marrying his mistress in 1984.

But that marriage, too, ended in scandal after his wife fled the country with their daughter. Vajiralongkorn then had the daughter kidnapped and brought back to Thailand — and he subsequently married Srirsami who had been a member of his staff whose job was said to be “waiting on” the prince. But the marriage was kept secret from the Thai public for several years.

Rumors about other children and other mistresses or even wives have swirled for years around the crown prince, but nothing has been confirmed.

4. He is Close to Thailand’s Exiled Prime Minister

Vajiralongkorn has been accused of taking a greater interest in inflating his own bank account than in continuing the good works for the Thai people that made his father a universally beloved monarch. He is reportedly close to Shinawatra, a telecommunications billionaire who has lived in Dubai since being deposed as prime minister.

Shinawatra, from abroad, has continued to wield influence in Thai politics and is suspected of financing the Red Shirts, a militant group that opposed the current Thai government. Rumors that the crown prince has engaged in business deals have never been proven, but while his father remained largely impartial in the country’s politics, whether his son could do the same have caused uncertainty in Thailand and fears that the country could revert to a military dictatorship under his reign.

Why is the royal succession in Thailand important to the United States? Thailand is America’s longest-standing ally in Asia, with the two countries first signing a “Treaty of Amity” in 1833. Thailand was important to U.S. security in the region throughout the Cold War era, and continues to cooperate closely with the U.S. on security issues issues such as counterterrorism and drug enforcement as well as the prevention of nuclear proliferation.

But with Thailand’s recent political instability, relations have grown shaky with the United States, which was seen as taking sides in the 2014 coup and has been sharply critical of Thailand’s ruling military junta.

U.S. foreign policy experts worry that a weak or possibly corrupt monarchy with Vajiralongkorn on the throne could further erode relations, leading to greater dangers for the United States throughout Asia. 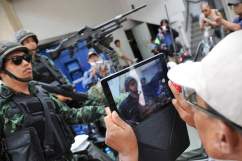 Thailand Under Martial Law: Pictures You Need to See