Good news, Brooklyn. The NCAA recently announced that NCAA Tournament games would come to the Barclays Center for the first time in 2016. The home of the Nets will also hold an interesting early season match-up between a battle of undefeated 4-0 teams when No. 12 Villanova faces No. 19 Michigan in the Legends Classic final.

The combination of Zac Irvin and Caris LeVert in the backcourt has contributed to the hot Michigan Wolverines start. Nova has been led by junior guard Dylan Ennis.

On Monday, Michigan defeated Oregon 70-63 and Villanova defeated No. 14 VCU 77-53, including a dominating second-half performance outscoring the Rams in the 2nd half by 22 points.

Tipoff is set for 10 p.m., with TV coverage on ESPN2. The game is also on Watch ESPN. Here’s how to watch online and on mobile: 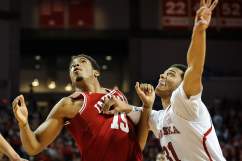 Read More
Basketball, Breaking News, ESPN, TV
In a battle of 4-0 teams, No. 12 Villanova takes on No. 19 Michigan in the Legends Classic final at the Barclays Center.