The Washington Redskins are a dysfunctional mess from their owner, to their head coach, to the players — that’s not even factoring in the long-running controversy about the team’s potential name change that could happen within the next few years.

So, it’s no surprise that on Wednesday, Redskins players got into a scuffle during practice and decided to throw haymakers all over the place — WITH THE MEDIA CAPTURING EACH SECOND OF IT!

This isn’t the first time the Redskins have been involved in a brawl this season, although the first wasn’t actually amongst each other.

Video first reported on TMZ’s website shows receiver Andre Roberts and corner Bashaud Breeland taking swings at each other before players and coaches came in and separated the guys.

While the video shows each player being separated, there is no evidence that each player has since apologized or made amends for the incident. 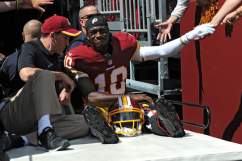