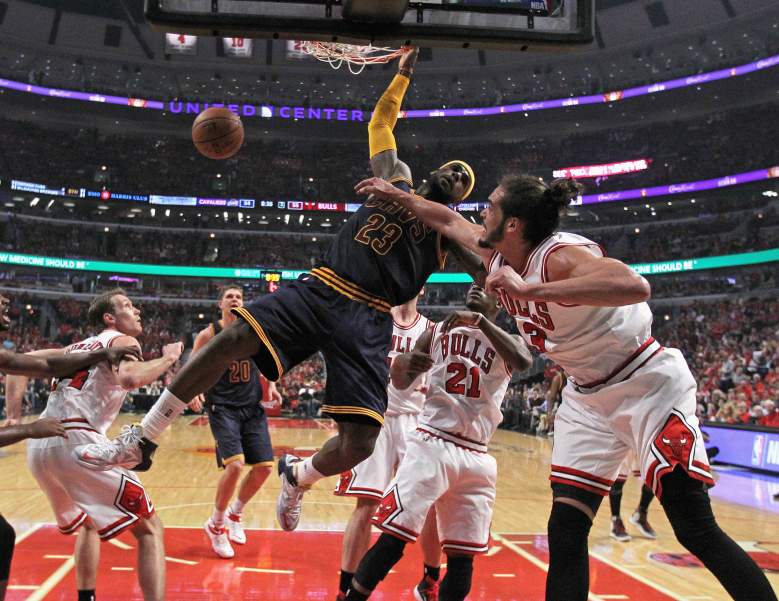 The Bulls took a 2-1 series lead over the Cavs with a victory Friday night. Game 4 is Sunday. (Getty)

Derrick Rose gave the Chicago Bulls a 2-1 series lead over the Cleveland Cavaliers with a dramatic, buzzer-beating 3-pointer Friday night.

The oft-injured point guard poured in 30 points and the Bulls outrebounded the Cavs 54-39 in their Eastern Conference semifinal series.

Chicago has a chance to go up 3-1 when it hosts Cleveland Sunday in Game 4.

Tip time is scheduled for 3:30 p.m. Eastern and the game will be televised by ABC. Mike Breen (play-by-play) will be joined by analysts Mark Jackson and Jeff Van Gundy.

Editors note: Looking to make the NBA Playoffs a little more interesting? Heavy’s partners over at DraftKings have created a fantasy basketball $100K Sharpshooter contest, which is scheduled to begin Sunday, May 10, at 3:30 p.m. Eastern. The contest is FREE for first-time DraftKings users and $3 for current members. If you miss the deadline for Sunday’s contest, don’t worry, the Sharpshooter is an ongoing event and there will be another chance to play Monday.

Derrick Rose Banks in Game-Winning Triple – Taco Bell Buzzer BeaterWith less than five seconds in regulation, Derrick Rose nails the desperation triple off the glass to win game 3 over the Cavaliers. About the NBA: The NBA is the premier professional basketball league in the United States and Canada. The league is truly global, with games and programming in 215 countries and territories in…2015-05-09T03:19:29Z

Rose Out-duels Lebron James in Game 3 ThrillerDerrick Rose and Lebron James battle wire to wire in Game 3. About the NBA: The NBA is the premier professional basketball league in the United States and Canada. The league is truly global, with games and programming in 215 countries and territories in 47 languages, as well as NBA rosters at the start of…2015-05-09T03:50:19Z