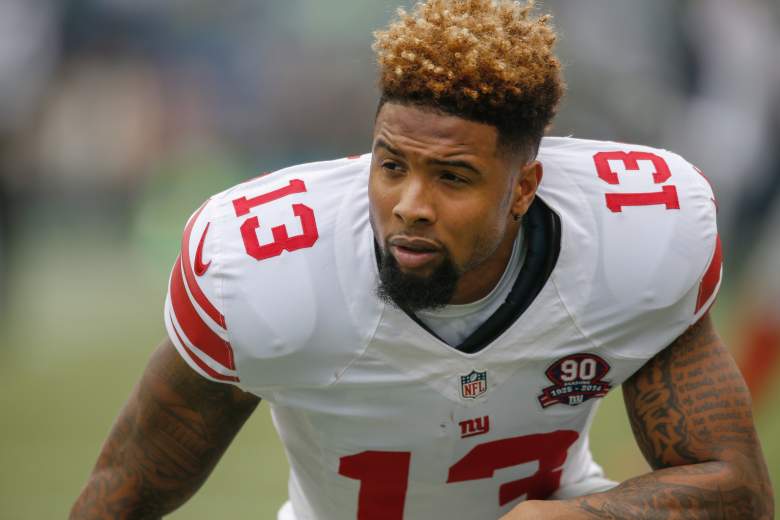 The New York Giants standout is reportedly in the midst of a brand-new relationship with social media maven Amber Rose. (Getty)

According to gossip site TMZ, the New York Giants star wide receiver is in the “early stages of dating” Amber Rose. Sources told the site that the pair met through a mutual friend and have been talking and texting frequently, including a date at TAO restaurant in New York City.There’s not much more to the relationship than casual dates, but that reportedly hasn’t stopped Beckham, Jr. from pulling out a few romantic stops. TMZ wrote that he presented Rose with her own bouquet of white roses during their NYC date.

Rose first broke into the public spectrum when she appeared in a Louis Vuitton print advertisement featuring Kanye West’s sneaker line. Since then she’s launched her own eyewear line and opened a clothing line with her friend Priscilla Ono called Rose & Ono in 2012. Rose was previously married to rapper Wiz Khalifa and the pair have a son, Sebastian Taylor Thomaz. She’s also incredibly active on social media and regularly posts photos of herself:

This isn’t the first time Beckham’s love life has made headlines. In fact, last season, as he was rising through the NFL ranks, the former first round draft pick was part of dramatic off-the-field story that included everything from a fake-fiance to an alleged child.

The New York Daily News reported that Beckham had denied the claims of Erica Mendez, a Houston, Texas native, who said that she was engaged to the wideout. Beckham, his father, and even the New York Giants, all refuted the rumors with Beckham releasing a statement:

The entire story is fabricated. I have never been engaged. I don’t have any children. And I have never met this person who is making these claims.

Mendez, who previously attended Texas Tech, was “working on her own lip gloss line, memoir and boutique,” according to her now disable website.