Charles Clay has been a valuable addition to the Bills’ offense. (Getty)

Marcus Mariota returns from the bye week to take on Rex Ryan and the Bills on Sunday. Buffalo, for all the defensive blustering from their coach, hasn’t been very good on defense this season. The Bills have just seven sacks, and they are ranked 29th in pass defense. That’s one reason the Bills are less than a two point favorite heading into Nashville this Sunday.

It may have changed from LP Field to Nissan Stadium, but it didn’t change how the Titans play at home. Their last loss against the Colts dropped the Titans to 0-5 SU in their last five home games, according to the OddsShark NFL Database. The Bills aren’t a particularly strong road team, but are 7-3 ATS in their last 10 games overall.

If there was ever a time to break a home losing streak, it would be now. The Titans will play their next three games at home, and won’t make an appearance on the road for the entire month of October.

These teams haven’t met since 2012, but the Titans have won five straight meetings.

The O/U is set at 42 at most sportsbooks, according to the OddsShark NFL Database. The total has gone under in 9 of Buffalo’s last 12 games, but don’t be so sure on this one. The Titans have shown they can move the ball, and Buffalo has given up a ton of points. The Bills are missing two of their top running backs, which could make it harder for them to control the game. 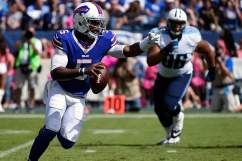