France will play their game at Wembley Stadium as scheduled today after the events in Paris four days ago. Explosions rocked the outside of Stade de France, in one of several terrorist attacks around the city that left over 129 people dead.

France captain and goalkeeper Hugo Lloris said Tuesday’s game would be “quite emotional.” Elsewhere in Europe, Belgium and Spain have postponed their friendly amid security concerns.

Focusing on soccer, Les Bleus have won six straight over England, who look to rebound from last week’s loss to Spain. The 2-0 defeat was England’s first loss since their 2014 World Cup exit.

Today’s game will be available on Fox Sports One in the US at 3:00 p.m. Eastern.

during the international friendly match between Spain and England at Jose Rico Perez Stadium on November 13, 2015 in Alicante, Spain.

Watch France vs. England on Mobile 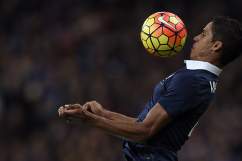