The above video shows Clemson head coach Dabo Swinney awarding punter Andy Teasdall a scholarship prior to the 2015 season. Teasdall was previously a walk on for the football team and the video was posted by Clemson in August.

Swinney is in much better spirits with Teasdall in this video than he was during the ACC championship. Swinney’s reaction to Teasdall’s decision to go for a fake punt made national headlines and caused a lot of buzz on the internet.

Swinney noted at the end of the scholarship video that it is only good for one year at a time. Hopefully, Teasdall’s performance in the ACC championship does not prevent him from getting a scholarship for next season.

In the second quarter of the ACC championship, Clemson sent out their punting unit on 4th and 13th. Teasdall took the snap but decided to attempt a fake punt by running with the ball instead of punting it. He was quickly tackled by North Carolina and gave the Tarheels great field position.

Here is a look a Swinney’s reaction to his decision to try a fake punt: 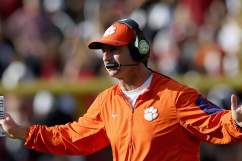