No. 3 Michigan State takes on No. 2 Alabama in the Cotton Bowl in the College Football Playoff semifinal game. Both teams enter the contest at 12-1 and have similar styles of play.

Vegas has Alabama as a heavy 10-point favorite in the matchup. This year’s Crimson Tide resembles the Alabama teams of year’s past.

They are built on great defense and a punishing run game. This is why Heavy is going with the favorite but likes Michigan State to keep it close.

The Spartans are tested with wins against Oregon, Michigan, Ohio State and Iowa. All four teams are ranked in the top fifteen in the College Football Playoff rankings.

Michigan State has proved they can win close games and just won a Big Ten championship game that functioned as a play-in game to get into the College Football Playoff.

Ultimately, this game will come down to which quarterback makes the least amount of mistakes. If Connor Cook or Jake Coker throw multiple interceptions, it will likely be a death sentence for their team.

For the Spartans to have a chance they need to slow down Derrick Henry. While we do not expect Henry to get 200 yards rushing, we expect him to be able to do enough to lead Alabama to a close victory.

Heavy is taking Alabama straight up and Michigan State against the spread in a relatively low scoring affair. 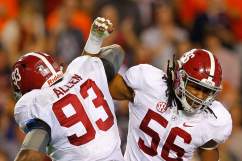