Ben Roethlisberger and the Steelers will face their toughest defense so far in Denver. (Getty)

The premier matchup in the NFL is in Pittsburgh this week, as the red-hot Steelers offense lines up against Denver’s top-ranked defense. It’s an important game in the standings for both teams, but especially for the Steelers, who could be projected into the playoffs for the first time this season with a win today.

Pittsburgh has been scoring, but it won’t come easy against this Broncos defense. Denver is allowing just 17.3 points per game, and leads the NFL with 44 sacks. The Steelers will need to make a priority of protecting Ben Roethlisberger, who has already missed several games due to injury.

With a road win, the Broncos can continue to challenge the Patriots for the top seed in the AFC. Denver is 4-1 with Brock Osweiler as a starter, and he’ll get a fifth start with Peyton Manning still nursing a foot injury. Manning returned to the practice field this week, but is still not ready to return to action.

Kickoff is scheduled for 4:25 p.m. Eastern. CBS has the broadcast, with Jim Nantz and Phil Simms on the call. Stay here after kickoff for live updates and highlights throughout the game.

The Steelers nearly give it away, after Ben Roethlisberger throws an ill-advised interception. But Denver was unable to capitalize on their final drive, and the Steelers put together a fantastic second half to win this game.

With just under 3:30 remaining, the Steelers strike again. They’ve now scored at least 30 points in six straight games, and have the lead late in the final quarter.

The Steelers receivers are ? tonight.

Tie game. After a third straight Broncos punt, the Steelers get back in the endzone. Two passes to Brown, two to Wheaton, and one more to Wheaton in the front left corner for six. Broncos 27, Steelers 27

Pittsburgh gets one back. A back corner fade from Roethlisberger to Antonio Brown makes it a one-score game. Broncos 27, Steelers 20

Roethlisberger to Brown for TD against Harris. First TD Harris has allowed since 2013. #Steelers cut into lead

The Broncos offense has come alive. A bubble screen to Thomas finishes off a 10 play- 80 yard drive. Broncos 27, Steelers 10

Osweiler leads the Broncos down again, and Emmanuel Sanders is already over 100 yards receiving. On 3rd and goal, Osweiler does it himself for six. Broncos miss the extra point. Broncos 20, Steelers 7

Broncos did not score TD on 24 straight drives before scoring TDs on each of their past 3 drives in Heinz Field. lead Steelers 20-7

Emmanuel Sanders is left alone on a go route, and sprints untouched for a 61-yard TD. Broncos 14, Steelers 7

Maybe Steelers defense thought Emmanuel Sanders was still on their team, since, uh, no one covered him on that 61-yard TD catch

That's the @Broncos 1st offensive TD in their last 25 drives.

DeAngelo Williams takes a pass for 19 yards, the bangs the TD home on the next play. Steelers offense keeps on rolling. Broncos 0, Steelers 7

Broncos fumble deep in their own territory. Steelers suddenly in the redzone. Broncos 0, Steelers 0

Steelers start with possession. It doesn’t look like Pittsburgh in December quite yet. Broncos 0, Steelers 0 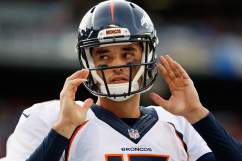 How to Watch Broncos vs. Steelers Live Stream Online

Read More
Denver Broncos, Football, NFL, Pittsburgh Steelers
Ben Roethlisberger and the Steelers can break into the Wild Card picture with a win at home over Denver.