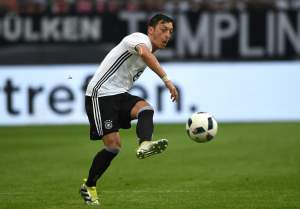 Germany begins their Euro 2016 run by taking on Ukraine. Germany will look to add a Euro 2016 trophy to their 2014 World Cup title.

Both teams are part of Group C with Northern Ireland and Ukraine.

The Ukraine is ranked 19th in the FIFA world rankings. Germany is ranked 4th.

Germany has had some lapses in recent friendlies to teams like Slovakia and England. With Euro 2016 kicking off, fans can expect them to be in top form.

While Ukraine will put up a solid defensive fight, Germany has too much offensive firepower to be stopped in their opening match.

Read More
Euro 2016, Germany, Soccer
Find out all the betting details for Germany's opening Euro 2016 match with the Ukraine.