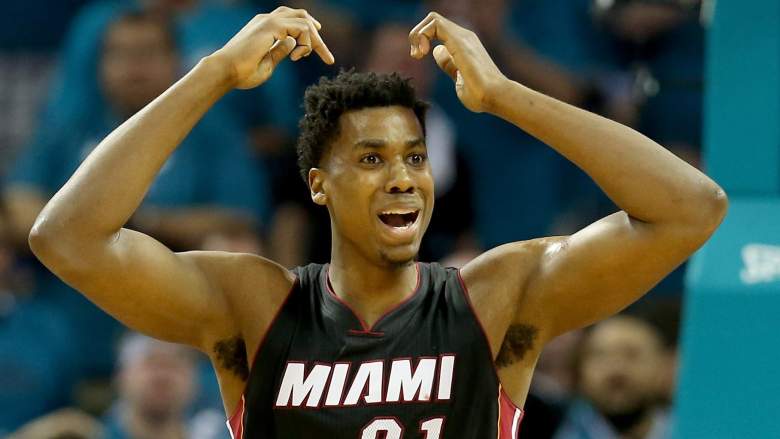 Could Hassan Whiteside, one of the most sought-after NBA free agents this summer, be set to join the Los Angeles Lakers?

In a now-deleted screenshot of an alleged direct message between the talented shot-blocking center and another user, Whiteside says, “I’m moving to the LA area pretty soon.” Here’s a picture of the deleted Tweet (WARNING: NSFW language):

So Hassan Whiteside is heading to LA. Nice way for Pat Riley to find out @LeBatardShow pic.twitter.com/IkpbLK4Qcc

It’s obviously important to take this with a pumpkin-sized grain of salt because there is no way to tell if this is real or not (The user who posted the conversation with Whiteside deleted her account soon thereafter). Still, it’s undoubtedly intriguing, as there have been rumors that the Lake Show will aggressively pursue the 27-year-old center, who has developed into the league’s best rim-protector the last two years with the Miami Heat.

“I really don’t think it’s about loyalty,” said Whiteside this weekend when asked about a potential return to South Beach. “I think it’s just about the best situation for myself and that’s what I think it is.”

While there’s a good chance that this is just another example of why you shouldn’t believe everything you read on the internet, this will still certainly add fuel to that fire that one of the league’s bright young stars is headed for Hollywood.