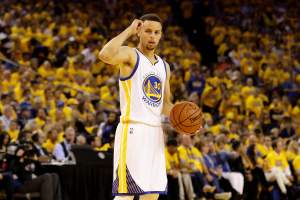 Steph Curry has excelled in the NBA despite being smaller than many players. (Getty)

Curry has turned a perceived weakness into a strength on and off the basketball court. His father, Dell, spoke about the phenomenon to ESPN.

He’s the everyman. He looks like the average guy when the public has a hard time relating to these super-tall muscular men. And despite that, he goes out and beats them at their game. Add to that the fact that he’s a down-to-earth, approachable guy, and you have the whole package,” Dell Curry told ESPN.

Despite being a star player at Davidson, many NBA talent evaluators viewed Curry as a “tweener”. NBA teams did not know whether Curry would be a point guard or shooting guard at the next level.

Curry has used questions about his size to fuel his success in the NBA. In the video below, Curry reads from an old scouting report that calls his athleticism “below standard”.

The Golden State Warriors selected him seventh in the 2009 draft, but he was almost traded on draft night to the Phoenix Suns for Amare Stoudemire. The Warriors decided not to do the deal just before pulling the trigger, and it proved to be a decision that saved their franchise.