Mike Wallace’s brother Kenny posted the above photo of his brother beaten after a Rascal Flatts concert on Friday. (Facebook)

Kenny Wallace, Wallace’s brother and a Fox Sports analyst, posted a picture of Wallace after the fight, alleging that three men kept kicking his brother, even after he was on the ground at the parking lot and “knocked out.” Wallace also posted the photo to his own Facebook page.

Fox Sports reports that Lindsay tried to protect her father and was kicked in the ribs herself.

I am “tore up” and “sick to my stomach” about my brother “Mike” and his daughter Lindsey Wallace Van Wingerden and everyone involved in this senseless ass beating after a concert in Charlotte NC on Friday night .. My brother Mike laid on the ground “knocked out” and it was NOT even a fight and 3 men kept kicking my “knocked out” brother in the face.. Think about it? .. My brother was knocked out and they were kicking him in the face… I AM SO F**KING MAD!!

Motorsport reports that three men – Paul Lucas, 29; Nathan Lucas, 22; and Randolph Magnum, 24 – were arrested after the fight and charged with simple assault. Paul Lucas was also charged with assault on a female. They are due back in court on July 22.

Charlotte-Mecklenburg Police later released the 911 call, which included one person telling the operator “there’s blood everywhere.” One of the men arrested worked for Lucas Lawn & Landscaping, whose attorney said that the men have been mistreated by the public.

We were saddened by the regrettable events that took place on Friday, June 17. Upon learning that the offensive actions were taken by patrons who also happened to be employed by Lucas Landscaping, one of our service providers, we took swift and immediate action to terminate services provided by Lucas Landscaping at PNC Music Pavilion.

Wallace isn’t competing this season. He has 197 starts in the NASCAR Sprint Cup Series, with three Top 5 and 14 Top 10 finishes. He also has four wins in the NASCAR Xfinity series. 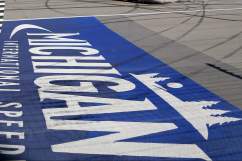