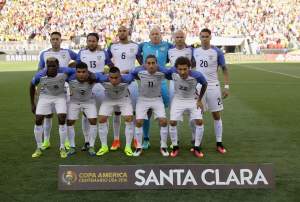 The United States will look to get its first win of Copa America 2016. (Getty)

The United States made up for their poor first match performance with a flurry of goals. The USMNT defeated Costa Rica 4-0 in their second Copa America Centenario match.

Clint Dempsey scored one goal and had two assists. The USA scored three first half goals to jump out to a lead that Costa Rica could not overcome.

The win gave the United States three points and puts them in a great position heading into their final match of group play against Paraguay.

Here’s a look at how the United States came up with the victory.

Bobby Wood Gave the USA a 3-0 Lead at Halftime

With his second assist of the night, Dempsey hit Wood in the middle of the field for the USMNT’s third goal of the first half. They took a 3-0 lead into halftime in an offensive explosion.

Jermaine Jones Scored to Make it 2-0

After a beautiful pass from Dempsey, Jones scored a goal just before the 40′ mark. It gave the United States a 3-0 lead.

Clint Dempsey Scored the First Goal on a Penalty Kick

It was a much better start for the United States. After Bobby Wood was shoved inside the box, the USA was given a penalty kick. Dempsey took the kick and gave the United States a 1-0 lead early in the match.